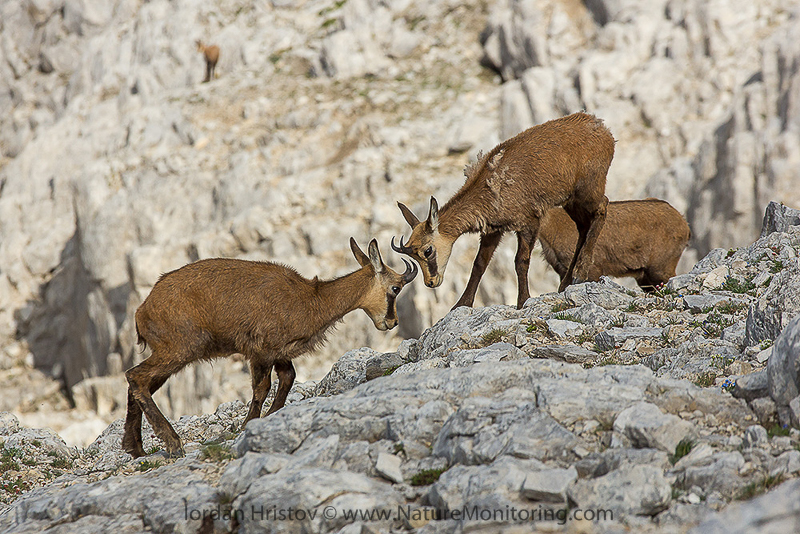 Pirin mountains are have some of the most picturesque and dramatic sceneries in the country. With their rocky mountain tops covered with marble stones they offer views like nowhere else in the country. In my childhood i used to go there every summer for berries picking but nowadays i get there less and less. Actually i realized that the last time when i did any trekking in Pirin was more than 10 years ago.

Here i was again quite a few years later with a will to visit one of the most picturesque areas: Mount Vihren and “Koncheto” (the Horse) – a rock phenomenon known for its narrow cliff top which one needs to “ride” to cross. Mount Vihren (2914) is the highest in the mountain and there are several routes to climb it. We chose the most difficult along “Dzhamdzhiev rab” where edelweiss flowers grow. It took us longer than expected but did manage to reach the Mount. Although it was rather exhausting but well worth it. The flowers were already in full blossom with their tiny little and gentle flowers. Such a wonderful flower.

The views along the route were mind blowing. The steep cliffs and abysses on either side of the trail made the adventure unforgetable. The sky was so dynamic that were stopping for pictures on every step. We finally reached the peak and after a short break for late lunch we started heading towards “Koncheto”. The descend from the mount was as steep as the ascend but very picturesque. The marbled stones were very slippery but luckily we had no problems.

En route to next stop we saw a few Balkan Chamois which looked very tame. I have always wanted to take close pictures of them. I have a bit of internal fight to go or not because the animals were some 300-400m away and had to go down and than up. Finally i made a decision and did not regret it. Quickly changed lenses and headed to the Chamois. Initially they did not let me approach them but then started grazing calmly and i got near enough. At certain stage two little cubs, perhaps from last year, started playing together and pushing each other with their horns. Wow, That is exactly what i wanted! Click, click, click! I was ready to go and leave them in peace.

The trail to Koncheto was not as steep as everyone was suggesting. Indeed the landscape was very dramatic with steep abyss but not that dangerous. The cliffs were dry so i was confident stepping down. The fatigue and the heavy backpack were the only factors that kept me slow going. We were about the spend the night around a shelter in the mountain top so we had some gear with us. 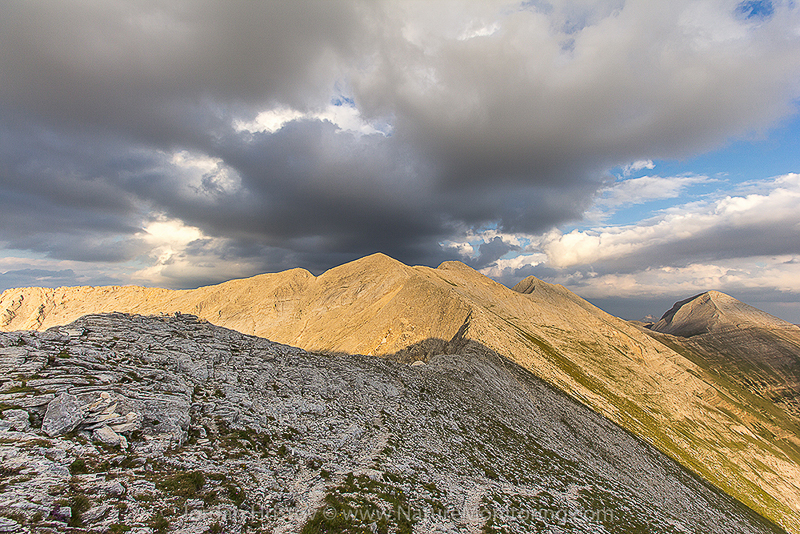 The dramatic sky over Koncheto and Mount Vihren © Iordan Hristov 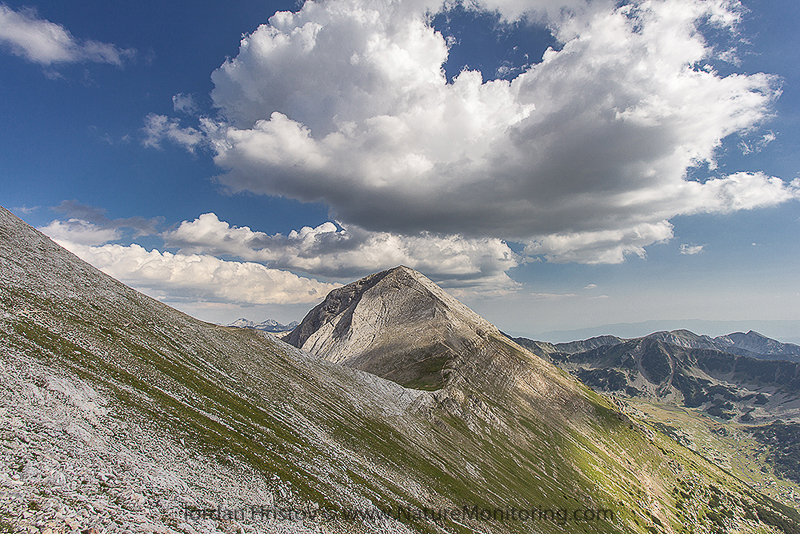 We arrived at the shelter in the late afternoon. It was getting late and many people were already there and also willing to spend the night there. It was going to be somewhat of an issue because the shelter had only 5 bunks within a 3x4m square of the shelter. That was a bit tight. We finally managed to squeeze in but the night was a bit harsh. There was hardly any air to breath. It might have been easier to sleep outside ат 2800 м a.s.l.

The sunset was not that spectacular but i still managed to find an interesting position for a few shots. The sky towards Mount Vihren was still that dramatic but not such towards the sun. I took a few pictures and off we went to bed. The night was a bit suffocating but it was going to be short anyway.

We were up at 5 a.m. for the sunrise. There were no clouds on the sky but the views were absolutely superb. The abyss and the cliffs around were really a one time experience. Large flocks of Balkan Chamois were wondering around adding to the experience. We took a few pictures and started our descend. 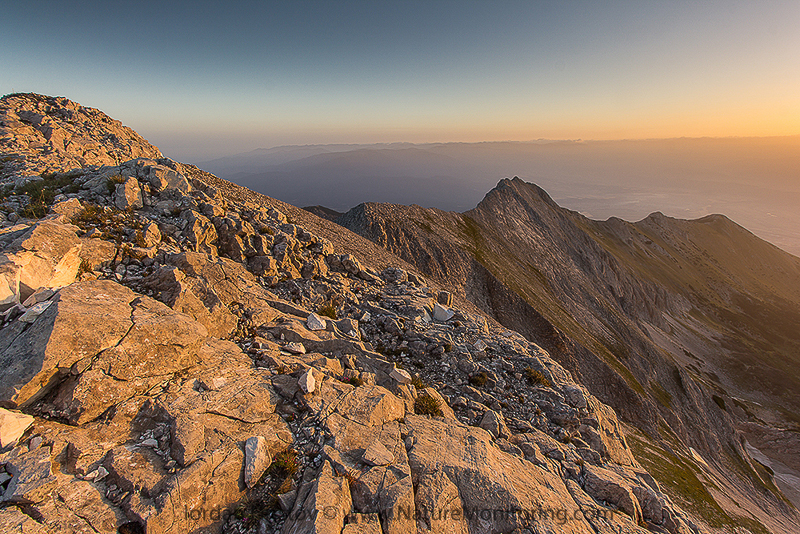 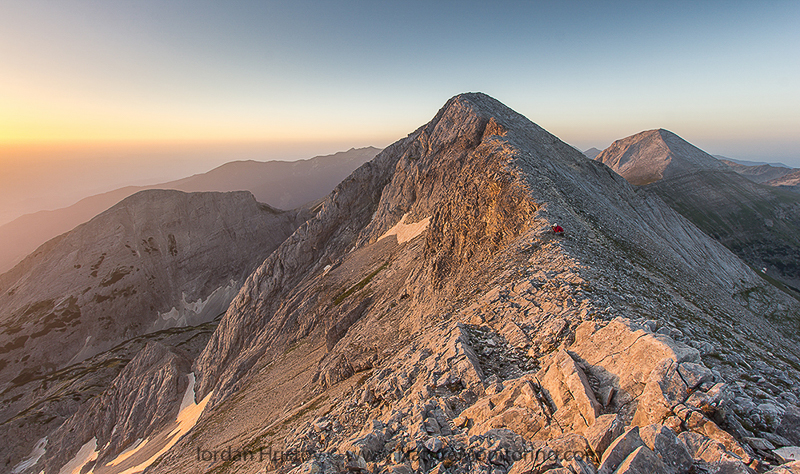 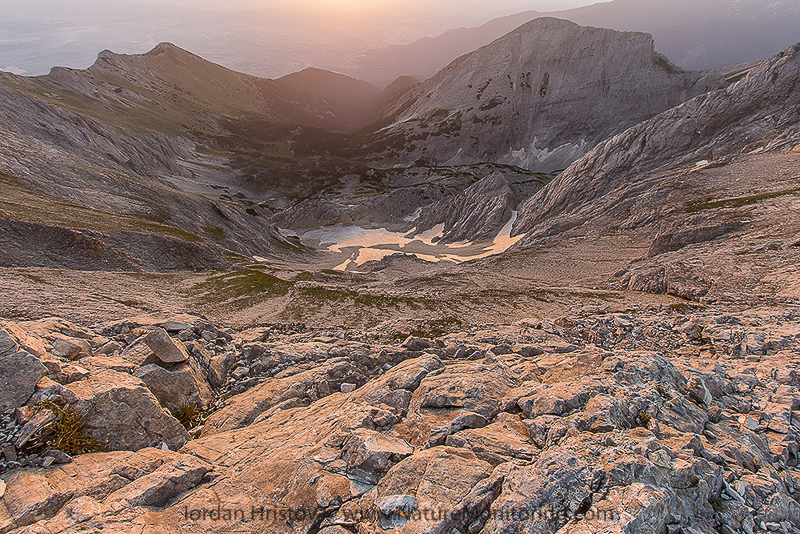 It was a second day we were in the mountains with very little water. The rocky tops of Pirin mountains are very dry with no water whatsoever. We had two bottles of 2.5 litters all together but we finished most of it on day 1. I was suffering a bit from this lack of water but managed to keep going. We played some music so the descend was nice and fast. We stopped for a few pictures but not for long. We wanted to keep going and reach water as soon as possible.

We arrived safely to the nearest chalet where cold beer was waiting for us. It is amazing how one forgets how important these things are to human body. We had a little rest and off we went. Regardless of all the difficulties it was a fantastic weekend which produced some good shots of Pirin mountains.