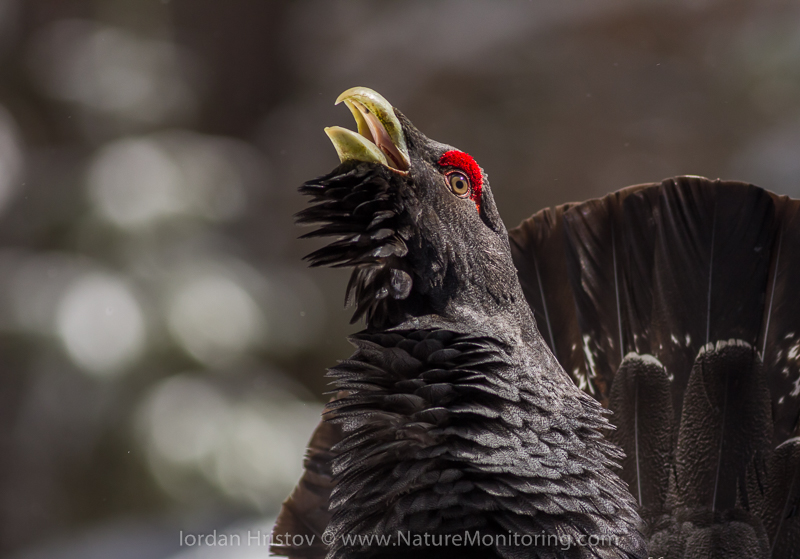 There are very few places where Wolves would howl right under the window of your room and bears will be sharpening their claws only a couple of meters away from you while you are asleep. It might be scary to some people but adventurous to others. Well, I just returned from this place full with excitement and willing to share stories of wild creatures wondering in centuries old spruce forest.

I have been dreaming of photographing Capercaillie for a long time and finally it has come. After a brief phone call I packed my backpack and couple of hours later a friend and I were on a trail leading us to the place for the night. It was a mountain chalet not far from Sofia with rather convenient transport. It still took us about 2,5 hours on the trail to get there. It wasn’t too difficult but all the photography gear was a bit heavy and kept us going slowly. There was a chairlift that would have taken us over most of the distance but for some reason we decided to walk. Don’t regret it though. En route we saw a few Ring Ouzels, Crossbills, Goldcrests and two Hazel Hens.

We arrived at the chalet at about 18.00. It was a very small place but rather cozy. The manager and a colleague were around the table waiting for us with the fire place on. The chalet manager has been around for 15 years and he had quite a few stories to tell. Once we set up the stories began. Stories about close encounters with bears, wolves, Capercaillies, Woodpeckers and fortunes of people lost in the mountains. Stories also included difficulties but never complains. It was amazing how this beauty of the mountain makes people be so positive regardless of difficulties of all sorts and even actions against him from local “administrations”. It was a super evening but it was time to enjoy the cozy rooms and get ready for the exciting day tomorrow when we expected to photograph Capercaillies.

Capercaillies here are not like those at other places and were not active before 10 a.m. so we didn’t have to get up early. We were out at 9 a.m. with batteries charged and quite a few memory cards in hand. It was a beautiful sunny weather. We reached the first Capercaillie territory in not more than half an hour. The bird was not there but a Balkan Chamois turned up right round the corner.  Hm, these birds seem to be rather lazy indeed. Although we couldn’t take a picture of the Chamois it was still great to see it. Further along there was very little activity but some Nutcrackers kept amusing us for the time being. 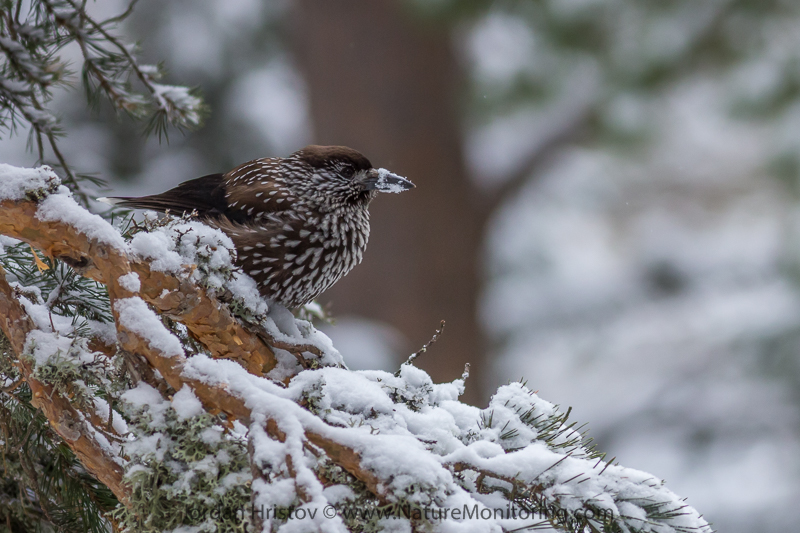 After a couple of treks up and down the track we heard it. The call of a Capercaillie. Here it is. A gorgeous male was approaching us with great pride displaying in its full superiority. It came so close that the 400 mm lens was too long. It stayed on the road for a while only a couple of meters away from us. But I managed to take a few portrait pics of the displaying bird. I can’t explain how intimate is the experience to have such a wild and difficult to see creature so close to you. 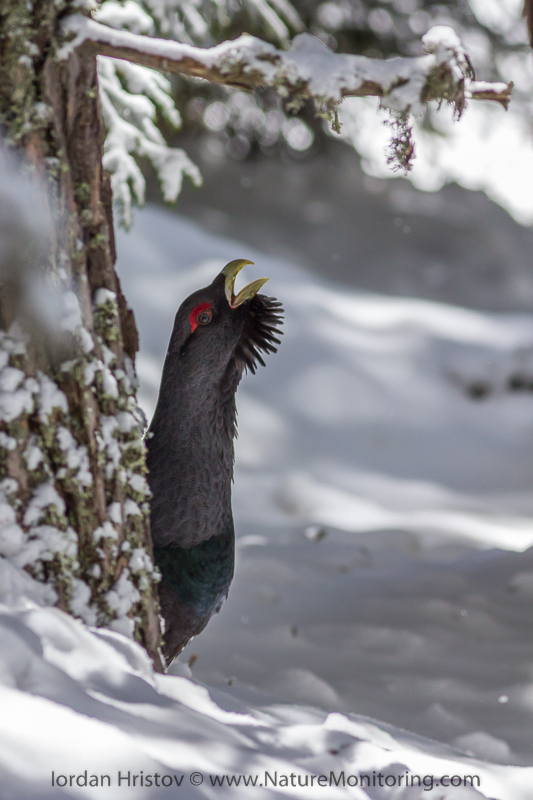 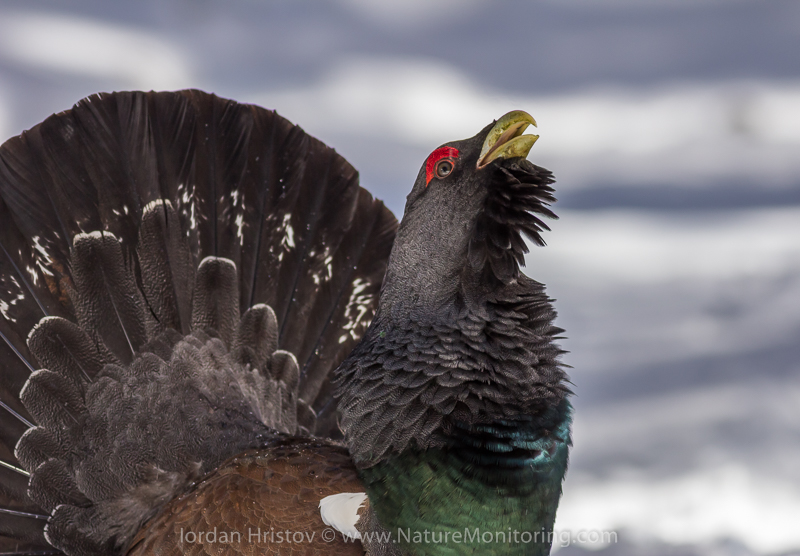 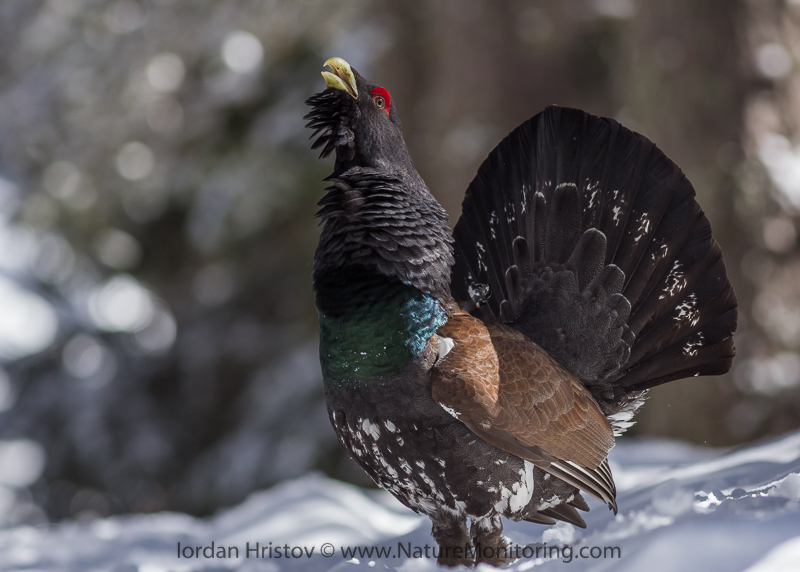 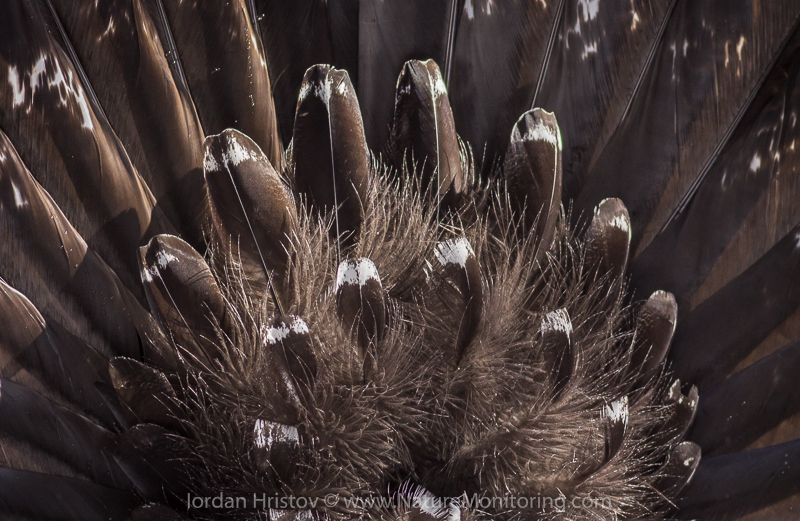 In a while it flew over to a tree where it started feeding. It was rather calm and I used the time to take a few more pics. Wow, what a bird. At certain point I just used my bins and kept looking and studying the bird without even taking pictures. Absolutely stunning birds…. 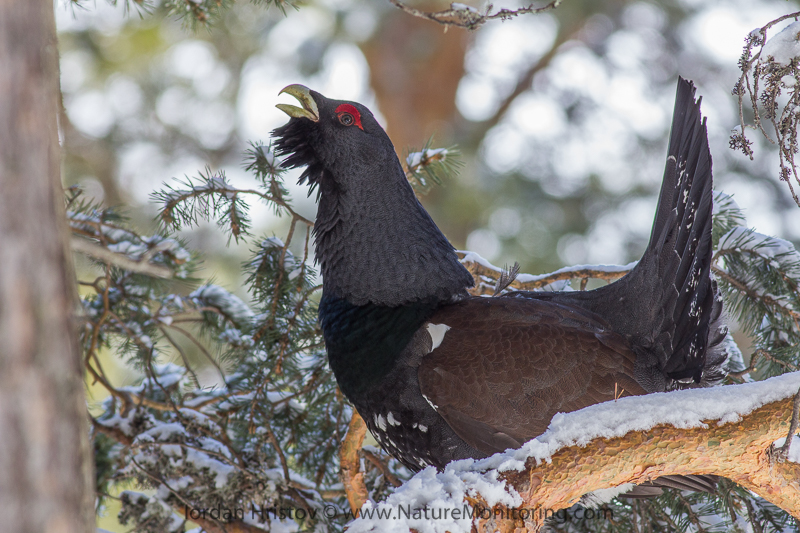 Capercaillie on a tree 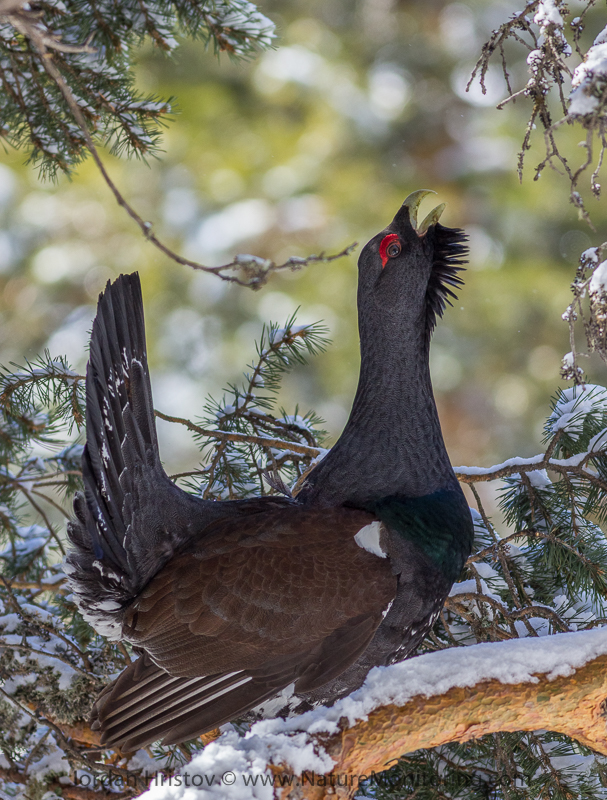 Capercaillie display on a tree 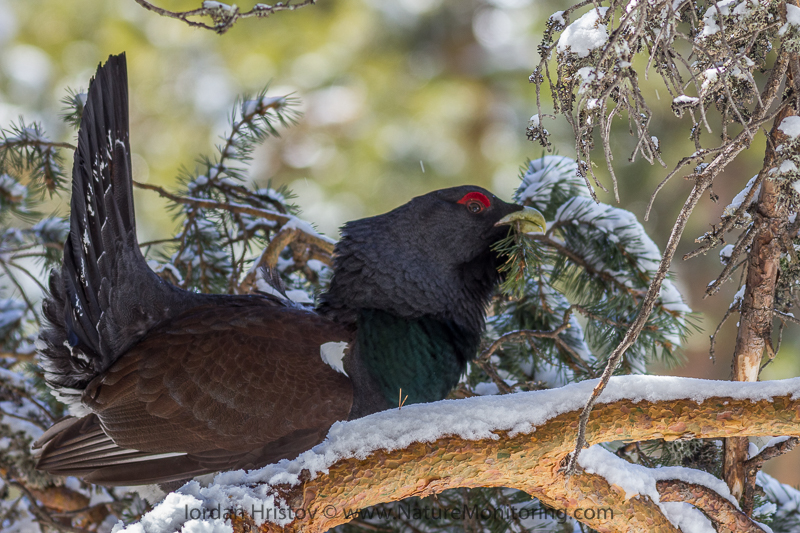 It is absurd that people still want to kill these birds. I really do not understand this “pleasure” or “sport” or “hobby”. Thanks to the work of the chalet manager these few birds are still around. Hopefully he will manage to protect them in the coming months and years but he would need some help and arguments. He would need to hire someone to stay around the birds during the winter months when people with motor sledges often cruise around and disturb the birds. He would also need to build some confidence in local administrations that natural resources can be used in ways different from hunting and logging. Well, I shall try to take birdwatchers and bird photographers to this marvelous place and try to raise some funds for the local people who do want to save this rich in biodiversity area.

Other birds of the area include Three-toed woodpecker, Pygmy Owl, Tengmalm’s Owl and a few more forest “ghosts” difficult to see. I think I have at least three more reasons to go back there rather soon. Anyone willing to join?

1 thought on “Capercaillie workshop in Bulgaria”