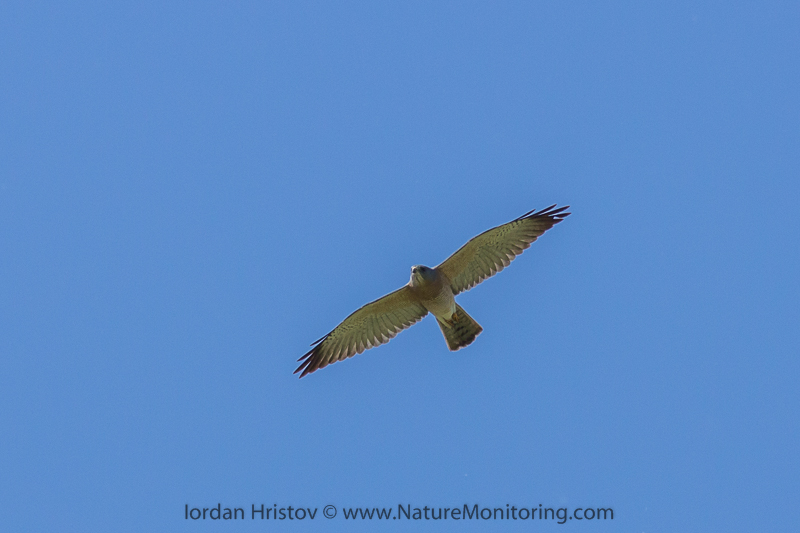 I was recently contacted by a group of German birdwatchers with a request to show them some desired bird species of Bulgaria. Amongst the key ones were Levant Sparrowhawk, Sombre Tit, Black-headed Bunting, Masked Shrike, Wallcreeper to name but a few. I was pretty excited as this was going to be my first trip for the year and the first post Covid trip. I like to think that everything is over with the pandemic and talk about it as something in the past but time will show.

After a careful planning and discussion of the customised itinerary, we were on our way to the South Western part of Bulgaria. We were going to make a circular route starting from the very South Western corner of Bulgaria with Mediterranean climate, habitats and species. Then heading to the Western Rhodope mountains to include the conifer tree area with species from that habitat and driving back to Sofia via the plains.

I collected my guests early in the morning from their hotel in Sofia and headed towards Melnik: the smallest town in the country. I had planned several stops en route to look for the target birds. Our first stop was about 1.5 hours south of Sofia where we looked for the Levant Sparrowhawk but the waiting didnt produce. We did log in Long-legged Buzzard, Eastern Olivaceous Warbler, Crag Martin and a few other common birds.

After this brief stop, we headed to the foot of Pirin mountains where our main target was Sombre Tit. The road was absolutely gorgeous and picturesque. We approached a remote village where we took a track leading us to a Vulture feeding site. The trail did produce quite a few good birds including our target. From the very beginning we started with Barred Warbler, Nightingale, Red-rumped Swallow, Golden Orioles, Hawfinch, Cirl Bunting, etc. It was in the first 200m of our walk when we spotted the first Sombre Tit perched on the chimney of an old barn. The view was fairly distant so we continued looking for the species. Further along the trail we spotted Middle spotted Woodpecker, Lesser spotted Woodpecker, Rock Bunting, and at least 5 different Sombre Tits which gave much better view. A nicely perched Hoopoe and several Golden Orioles stole the show. Even the majestic gliding Griffon Vultures couldn’t make it to the colourful presentation of the Orioles. Back by the car we had superb views of a Turtle Dove!

It was late in the day so we headed for lunch checking a few more stops. En route we added Tawny Pipit, Woodchat Shrike and more superb landscapes. Lunch was served in a small restaurant by Struma river cooling the hot air in the middle of Kresna Gorge. After lunch we headed to a rocky area in the dry plains to look for Western Rock Nuthatch. Did it show up? Oh, my it stood right by us not more than 20m away singing from a beautiful perch. It was absolutely awesome! On the way to the cliffs we had a brief stop for Black-headed Bunting which was another of the main targets for the group. We were already 2 out of 3 main target species so doing pretty well.

It was already late in the afternoon so we decided to head to Melnik but not before we took a brief stop for Rock Sparrow. Unfortunately it did not show up so it was time for a rest and a brief walk in beautiful Melnik. The town is situated at the bottom of a valley surrounded by sand pyramids. Known as a wine region, Melnik was the place to have the dinner with a glass of good wine! A favourite place of mine!

The day started young with a pre-breakfast walk to Rozhen pyramids. A superb formation of sand pyramids steaming with birds even in this late season. We started adding birds to our list immediately upon arrival: Middle spotted Woodpecker, Hawfinch, Red-rumped swallow, etc. A path was leading to the top of some sand pyramids  and we took it both for the birds and the view. Along the path we saw: Sombre Tits, Sardinian Warbler with chicks, and a surprising Rock Partridge which i had never seen here before! What a treat! And the view… absolutely stunning! Another favourite place of mine! Imagine this in the early morning light! 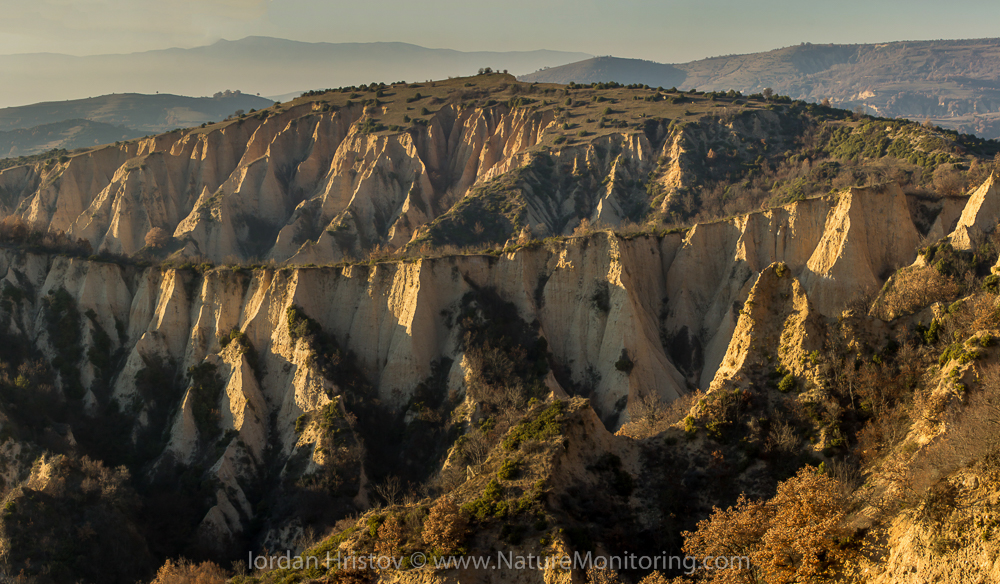 After the walk we took a well needed and deserved breakfast and headed for our already starting adventure for the day. We were going to spend the day looking for the Levant Sparrowhawk, Masked Shrike, Eleonora’s falcon and a few more great birds. On the way to the main site for the day we stopped again for the Rock Sparrow and this time we got them. Two birds sat nicely for us on the wires showing themselves rather well. It was brief but we saw them well.

Arriving at our spot for the day we saw another Black-headed Bunting and shortly after that we saw our first couple of Rollers which were rather territorial and chasing away every other bird approaching them. We selected a nice and shady area next to a territory of a Levant Sparrowhawk and sat down to wait for it. It was quite a productive stop with birds keeping our attention to the sky all the time. We had a flying over Spoonbill, Black Storks, Honey Buzzard, Booted Eagle, Short-toed Eagle and many more. About 20 minutes after we sat down we had the fantastic Levant Sparrowhawk flying right over our heads. It was fast but we saw it well. Only about 2-3 minutes later we had another raptor silhouette in the sky, a falcon silhouette – Eleonora’s Falcon! After the excitement ceased a bit we were thinking, what’s next? Well, a Masked Shrike of course. We took a walk towards a poplar forest where i knew there was a pair and soon we spotted it. It was a family with two chicks! What a treat! Absolutely amazing and productive trip! 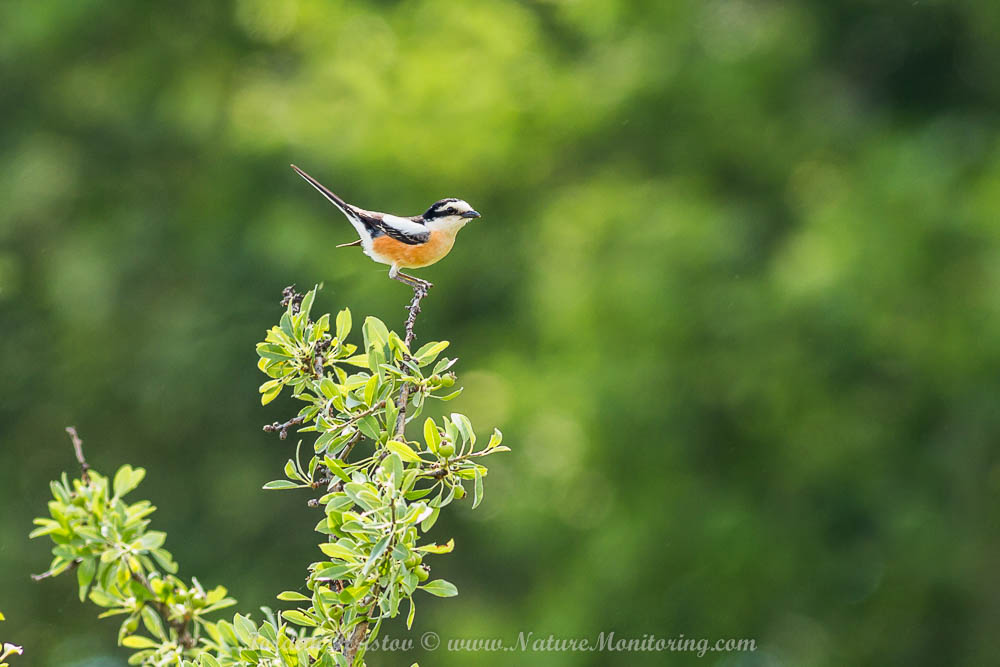 It was time for cold drinks but on the way i stopped briefly to show Blue Rock Thrush which sat for us right by the small cafe where we had our drinks. Mission accomplished! What a cracking day!

It was time to head to the mountains and change the habitat a little bit. In an hour and a half we were at a mountain pass at 1400m a.s.l. where we cooled down over late lunch. We did look up of course and kept our years open to log Serin, Pallid Swift, Crossbill and Dunnock. Over lunch we discussed the possible birds to see en route and paid another stop in the lowlands at Gotse Delchev town. The fishponds here attract a lot of birdlife but our main target was a Lesser Grey Shrike! Right upon arrival we spotted it! A family were feeding chicks and showed rather well.

At the fishponds we heard this alarm call of Orioles and turned around immediately to see another Levant Sparrowhawk chasing the birds around! Well, good timing! At the fishponds, two Eleonora’s Falcons sat nicely on a poplar tree presenting superb views with the scope. A Kingfisher flew past and two Little Ringed Plovers we flying around the sand banks. Now, we can head to the mountains as it was getting fairly late for the day!

The trip across the Western Rhodope mountains is along winding roads but truly picturesque landscape accompanied us along the road. It took us about 2 hours to arrive at a narrow rocky gorge leading us to the village where we were going to spend the night. Yet another picturesque landscape with amazing views. Along here we added Dipper and Grey Wagtail typical for mountainous rivers.

Arrived at the hotel just on time for a nice cold beer to celebrate the very productive day with over 70 bird species.

The day started in the usual way with a pre-breakfast walk at 6.30 a.m. to walk and bird around the village. For about an hour we saw over 30 species including Spotted Nutcracker, Grey-headed Woodpecker, Yellowhammer, Black Stork, Pallid Swift and Bullfinch. Another great start.

After breakfast we headed to the other main target for the day: the Wallcreeper! We drove along another narrow and rocky gorge to arrive at its breeding grounds. It tooks us some 20 min but we finally spotted it right up there on the wall face! Oh my, What a superb bird that is! My guests hadn’t seen it for like 40 years so it was another great bird added to the trip list! A real beauty! 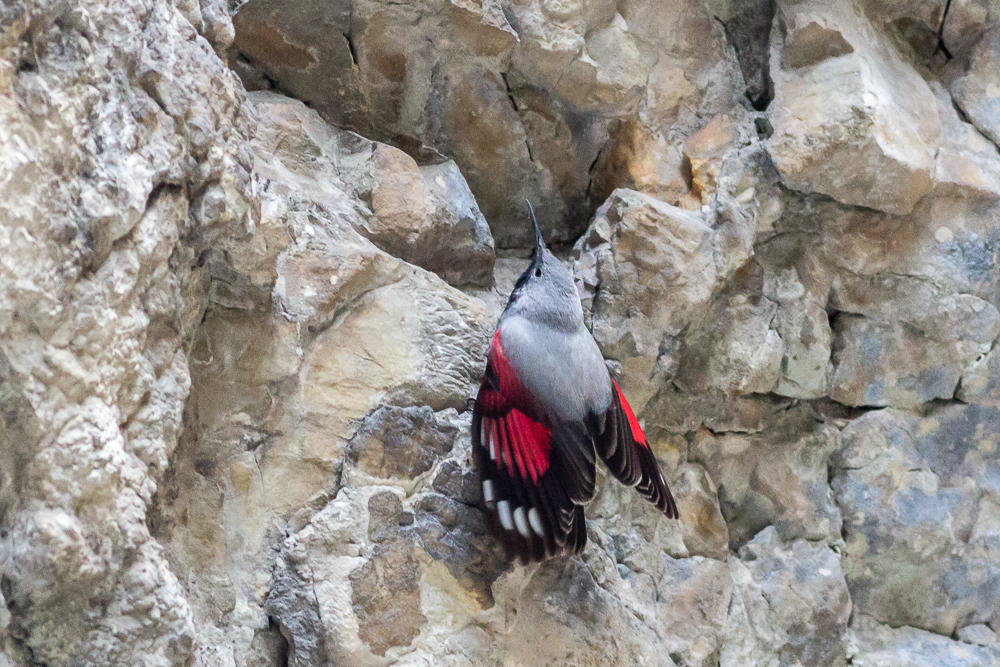 Since we accomplished our mission fairly quickly we decided to drive down the mountain and go back to the plains to look for more “mediterranean” species. We wanted to see Orphean Warbler but the late time in the season didn’t help and we dipped it. Nevertheless, we added a superb male Montague’s Harrier, several Rose-coloured Starlings which were still hanging around the breeding area. A colony of about 1000 pairs had just left the quarry where they bred this year. We were lucky to spot some late arrivals who were still feeding their chicks. We also added Isabelline Wheatear and Grey Partridge!

This was the official end of the trip! It was absolutely amazing, “You showed us a lot, and we would happily recommend your services” said my guests!

In about 1.5 hours we were back in Sofia and arrived late in the afternoon for the cool evening drink!

Thank you very much Koenig family! It was a superb trip!