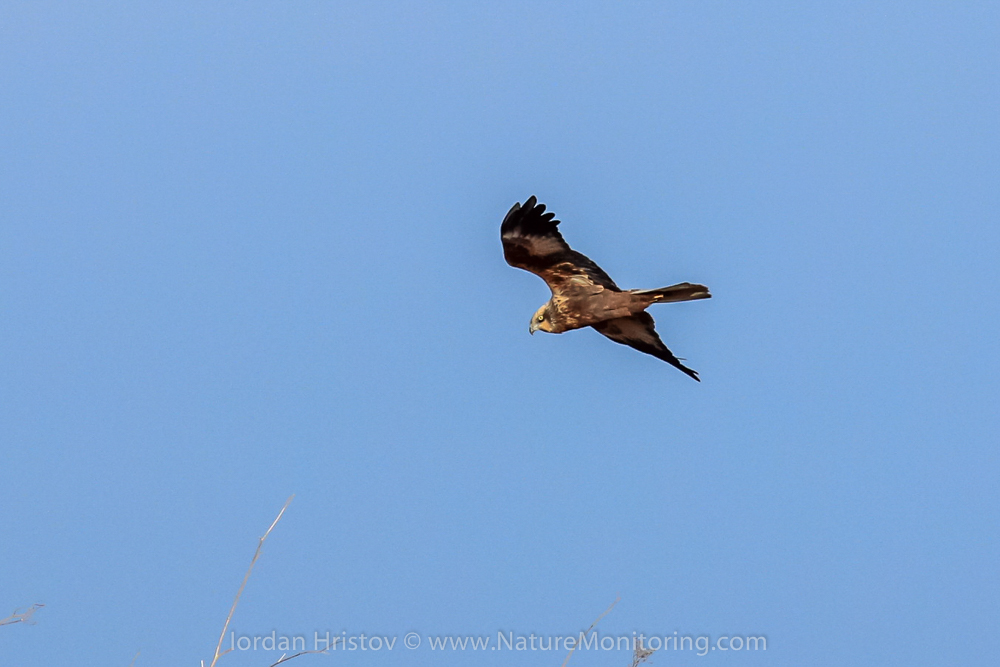 Bulgaria in winter  – a birdwatching tour: 8-15 February 2015 by Spatia Wildlife

A group of 3 birder from the UK and Germany arrived late in the evening on February 8th . We met at Varna airport and headed south to Bourgas. That’s the area where our tour was going to start from. It wasn’t before 23.30 when we could go to bed. Nevertheless this did not stop us from getting up at 7 a.m. for pre-breakfast birding.

We walked around the hotel grounds and noted our first Hawfinches 15+, Black necked Grebes, and Great spotted Woodpecker. Fairly quiet. We had a nice English breakfast which kept us going for a long time. After breakfast we headed to our first destination. We were going to spend the day around the Bourgas wetlands searching for Pelicans, Gulls and Geese.

At our first stop we logged the first lifous tick for one of us: Pygmy Cormorants. There were over a 100 birds everywhere around. A dozen birds were sitting in the reeds about 20m from the van. We also noted a couple of Smew, plenty of Little Gulls (20+), and a very unusual bird for this time of year: a White-winged Black Tern in full summer plumage. What a superb bird. We were amazed by the early arrival of this guy. There were quite a few Pochards and Great crested Grebes.

At the next place we added our first Ferruginous ducks, and Dalmatian Pelicans. The latter was another tick for our guest from Germany. More Pygmy Cormorants, Pochards and Tufted Ducks were around the marsh. Since the desire for the Pelicans was high we drove around the lake to approach them. From a distance it was visible that there are at least a dozen Dalmatians around the lake.

Once we got there we noted about the same number.  This time they were much closer and some of them were with a gorgeous red pouch. Absolutely superb bird. This has got to be the bird of the day. Our guest from Germany said ‘I did not believe we shall see them on the first morning’. There were also a dozen of Great white Egrets and soon we spotted our first Geese. Way out on the opposite bank but not too far to identify them as Greater White-fronted. There were no Red-breasted Geese amongst them which is another of our target bird.

We drove around the lake to check for White tailed Eagle but instead we found another unusual bird for the season: a Black Kite. Really untypical. Couple of metres down the road a Lesser and Middle spotted Woodpecker were sitting and feeding on the same tree just couple of metres away from us. They presented us with superb views which made them birds of the day for Jeremy and Nick.

Further along the lake a vast farmland was flooded by the heavy rain last week. Birds seem to love it. There were thousands…ducks, geese and swans. A careful look at them produced the first Whooper Swans, Pintails, Gadwalls, Wigeons, Teals and a young White tailed Eagle mobbed by angry birds (Buzzards). This great diversity of species in good numbers made the place one of the most special for the day.

We stopped for lunch at a roadside restaurant for a quick lunch. In half an hour we were back  in the game. After we warmed up we decided to walk around the Poda reserve managed by the Bulgarian Society for the Protection of Birds. This place seems to flourish in the last couple of years. On the reserve we logged a Common Snipe, Reed Bunting, another Dalmatian Pelican and lots of Marsh Harriers. Two adult White tailed Eagles were sitting on their favourite tree but soon they were in the air showing their white tails. We got a few postcards and pins from Poda reserve and went to our last place for the day: Atanasovsko lake. It was getting dark so we did not have much time but still added 20+ Avocets, 7+ Curlews, 2 Little Egrets and lots of Common Shelduck.

Thus we called it a day. We all concluded it’s been a good starting day.