Would you believe me if I say it was another superb day? I repeat that every day but it is true. A new set of new birds and more and more pictures of local birds.

As usual we started at 6 a.m. We packed our stuff and left the apartment where we spent two nights. It was time for some camping.

The first place that we visited is called Eash Khawr. It is just outside Salalah and offered superb birds. Upon arrival we noted that about 10 Marsh Harriers have roosted right next to the marsh. At the other bank there was a roosting Greater Spotted Eagle. This was right on the edge of the town. Amazing ain’t it?

We got a quick idea about the site and took a position on the south eastern side of the marsh where many waders had gathered. At the moment when we parked the car Bob said, oh… Sacred Ibis…Ohhhh my… I have been dreaming for this bird for a long time. Grabbed my camera and took a few quick shots. Looking around we noted over 30 species. There were masses of Little Stint going round the beach and collecting insects. A Temminck’s Stint was also there. Two Ospreys and the Marsh Harriers were regularly flying over to keep the birds maneuvering. Intermediate Egret was a good bird here. A group of 50+ Ruff and 10+ Eurasian Curlew brought more excitement and witness the migration. Once we finished with the marsh we moved over to the shore line for some seawatching. It didn’t take long to see hundreds of Sooty Gulls, and two new birds for me: Persian Shearwater and Socotra Cormorant. We stayed at the place for two hours and we could have easily stayed more. We had other sites to visit so off we went to visit Ayn Razat. 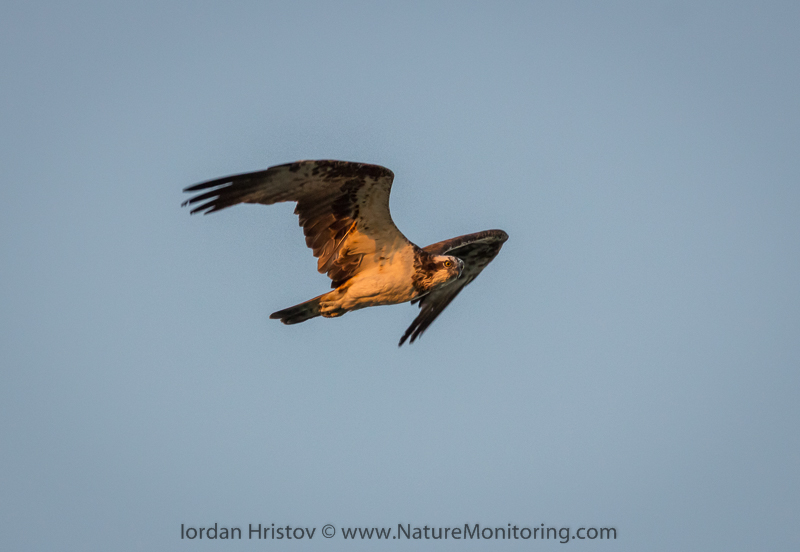 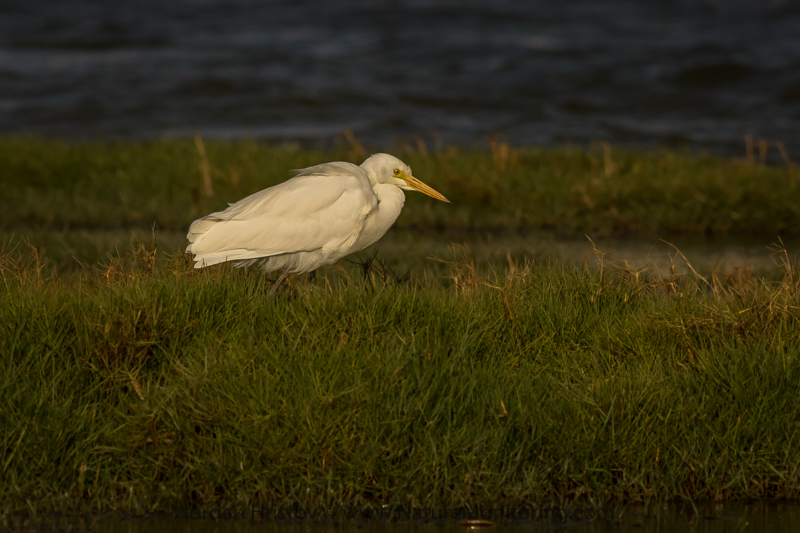 Ayn Razat is another of those wadi places. The difference here is that it had a garden with flowering plants. Shortly after arrival birds started turning up. A young Masked Shrike was just by the car park. An Eastern Olivaceous Warbler was singing as they do at home. A few meters further along the next new bird showed up: Shining Sunbird. A gorgeous male in its full plumage. What a bird. Woooow. I just stayed there looking at it speechless. Well I must admit I tried taking some pictures.

A spot with a few flowering plants was steaming with birds. Both Shining and Palestine Sunbirds where there. Also Blackstart, Tristram’s Starling and very many Cinnamon-breasted Bunting which proved to be rather common everywhere we go. While Bob was trying to take pictures of the Sunbirds I walked ahead and stopped by a fig tree. Hm, this should be a good place to look for the Bruce’s Green Pigeon. At the moment I thought about that I saw a bird flying in. What could that be? The bird was facing away but once it turned its head slightly I saw the green on the head… it was Bruce’s Green Pigeon….Wooooow… what a bird…I really wanted to see this one and here it is sitting on the tree right in front of me. Looked slightly to the right and there was another one. Then I noticed a third bird. Wow that is so exciting…The green color of the foliage and the color of the bird were creating some very special atmosphere. 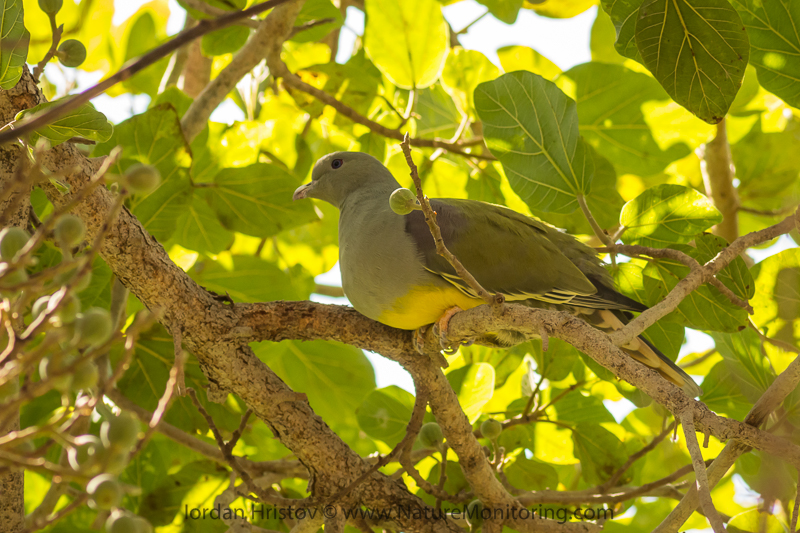 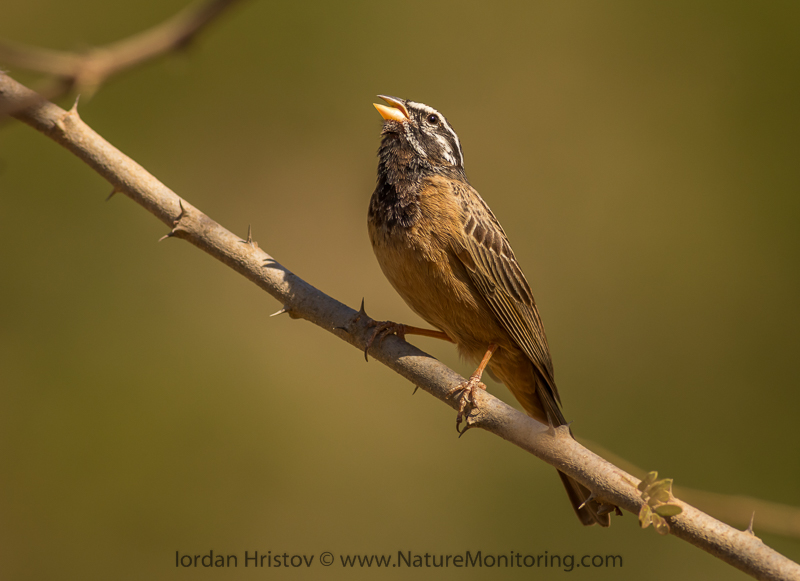 With a great relief I carried on ahead of Bob and just round the corner there was another new bird for me: a Golden winged Grosbeak. Another bird that I wanted to see before coming here. It landed on the top of the tree just for a couple of seconds so I couldn’t get a picture of it. Hope I will get one tomorrow.

We continued walking around with even greater relief of the good birding here. We even had time to look at butterflies. There are stunning ones over here. Couple of meters further along two strange pipits attracted our attention. They were all buff on the front, with no lores and very faintly marked on the front. The initial idea was for a Richard’s Pipit because of the missing lore but when we consulted the book we concluded it was a Long-billed Pipit – another new for both of us. 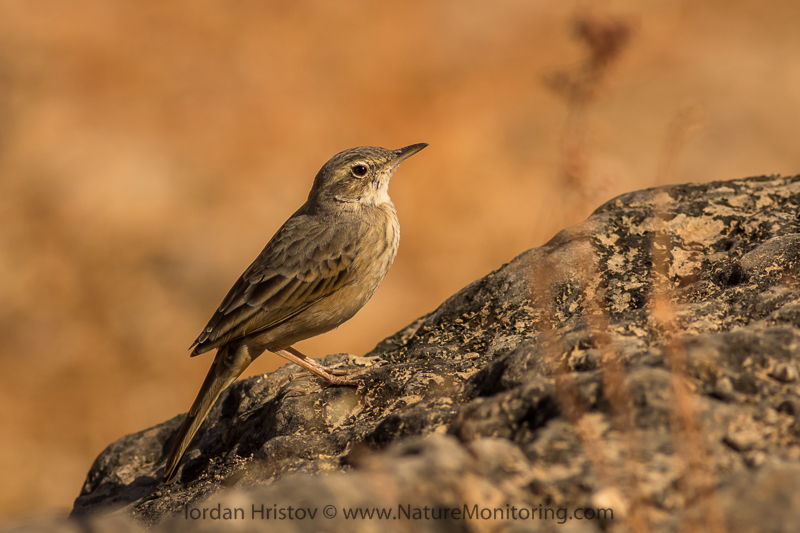 We decided to stop for a second and have a snack in the car. We had another spot to explore in the opposite direction so we wanted to take our time. After the snack we grabbed our stuff and off we went for some new birds. There were still a few we expected to see in the area. We stepped into the Wadi and saw another family of 7 Arabian Partridges, then Arabian Warbler and a big bird of prey attracted my attention high up in the sky. It had a white belly and was really dark…Lapped faced Vulture. This time the tick is for Bob. A few minutes later other two birds of prey attracted my attention. This time the whole bird was black with a huge white rump…..ohhh my…. Verreaux’s Eagle. Fully adult was flying high up there. Another individual with a bit more color was flying with him. This was a subadult. What a luck…to see not just the bird but in two different plumages. We were really pleased with this site and after enjoying some White breasted White eyes, we decided to go and change the habitat back to wetlands.

The name of the new place is Khawr Rawri. Situated just by an archeological reserve we had to pay 2 rials to get in. The wetland was a bit distant from the road so we had to walk for a while but it was worth it. We started with 5+ Glossy Ibises, 3 Ospreys, 10+ Flamingoes, some Spoonbills, Snipes and the highlight… 5 Pheasant tailed Jacanas… what a lovely bird this is. Once we finished enjoying the jacanas we wanted to check another spot that was meant to be good: Ayn Hamran.

Ayn Hamran is at the end of a straight road right off the motorway to the east of Salalah. It is quite a large area with lots of trees along a stream. We didn’t expect new birds here but wanted to check what the site looks like. Well, it was awesome. For half an hour we had more than six African Paradise Flycatchers. This is perhaps the best site in the area for them. We also added Ruppell’s Weaver, Blackstart, Grey Wagtail, and the superb Shining Sunbird. 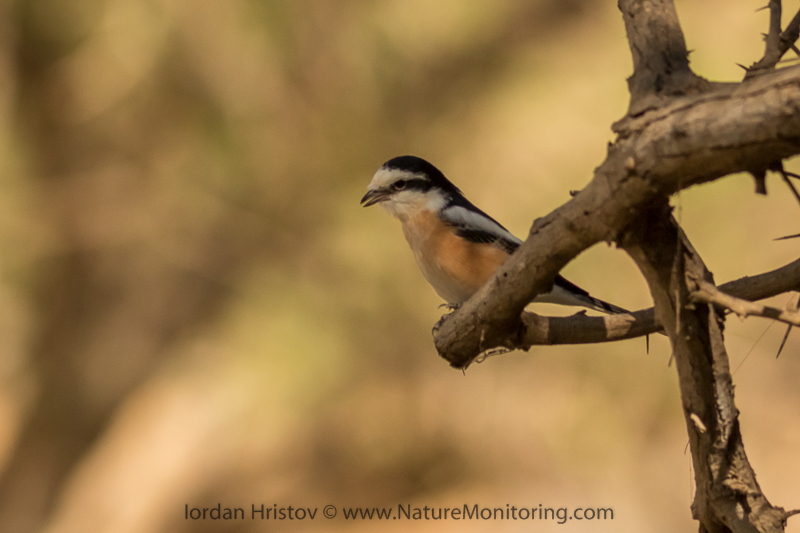 The fatigue from the early start was already suggesting we should go for a break and so we did. We stopped in Taqah for a pizza and headed to our next place where were going to spend the night: Wadi Darbat.

We arrived at the site while it was still light and managed to select good places for the tents. I thing this time we will manage to fall asleep quite early for another early start tomorrow.

The checklist for the day as at 88 species and quite a few new birds. What a day…time to get some sleep.