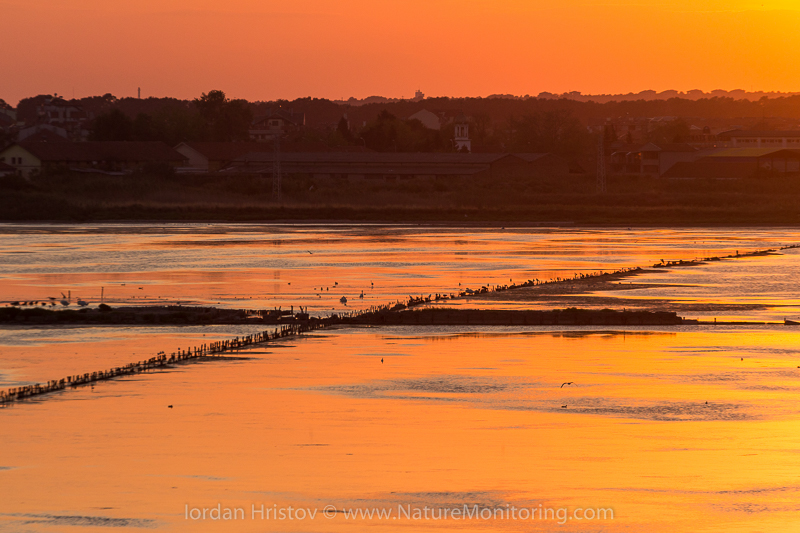 Today we are traveling towards the coast where the group will stay for three nights. We decided to have an earlier breakfast and depart earlier to have enough time for birding along the route. So we did, and we were on the road shortly after 8,30 a.m. It was a beautiful morning with some fog in the early hours.

Our first stop was next to a town called Madzharovo. A beautiful area with  cliffs and river meanders. The volcanic rocks are a superb habitat for a number of species that we were after. When I getting of the coach I heard one of our target species, a Rock Nuthatch was calling loudly echoing among the cliffs. Shortly after that a Blue Rock Thrush called, then a Rock Bunting, Alpine Swift, Middle spotted Woodpecker, Wood Nuthatch. We couldn’t see all of those and registered them only by their calls but it was still great to know they were active. Once it warmed up Griffon Vultures and the odd Egyptian Vulture started gathering in  a “cattle”. There must be a carcass around. A Peregrine Falcon stood on the cliff face overlooking the whole  meander. It must have a superb view from up there. It was marvelous. After we spent an hour or so at this spot we had to hit the road to the coast.

Before lunch we had an obvious migration of Black Stork, Eurasian Sparrowhawk, Lesser Spotted Eagle and some Common Buzzards. It was great to see the birds moving about.

After lunch we carried on to our stop where our main target was the Eastern Imperial Eagle. Although we saw the young bird yesterday we still wanted to see the adults. They tend to stay in their breeding territory. Shortly after our arrival we spotted one of the birds in the pair which was even displaying. Then the second bird joined and both of them started patrolling their territory. What a majestic bird this is. Other birds to note in the area were Woodchat Shrike, Northern Wheatear and Isabelline Wheatear. There were also quite a few Tree Pipits, Yellow Wagtail and a single Tawny Pipit. It was great to stretch our legs after lunch. After we exhausted more or less all of the species we carried on.

En route we decided to stop for coffee and ice-cream which was a very wise decision although we couldn’t really have them without looking at the sky. It proofed to be rather productive. For 5 minutes we had a pale Booted Eagle, a Lesser Spotted Eagle and three Black Kites. It was another wonderful stop.

After this we headed straight towards the hotel and arrived on time for a nice and relaxing walk before dinner. We ended up with 77 species for the day with some really good birds.