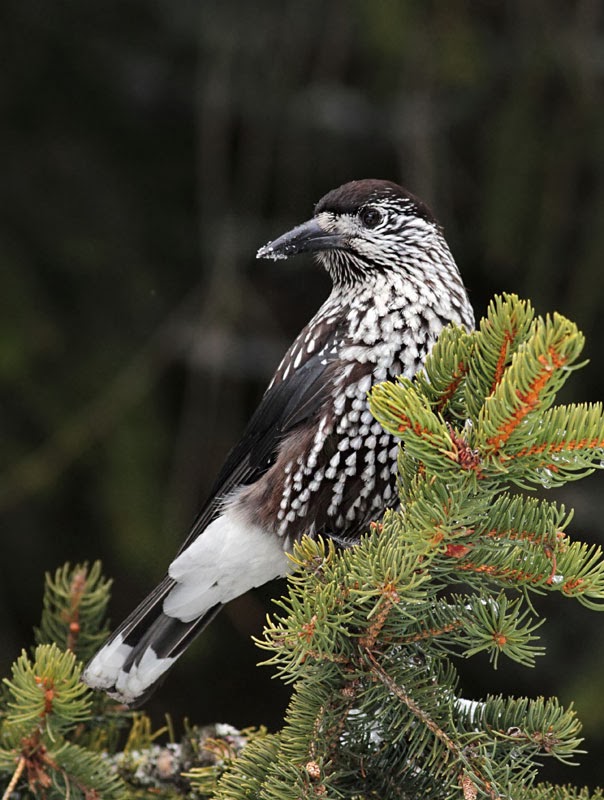 Nutcrackers Nucifraga caryocatactes are lovely birds. Strangely enough there are very few photos of this peculiar bird. Perhaps the areas where they live are too distant for photographers.

Well after having heard that a few people have photographed it, I decided to give it a try. Initially I wanted something different. A unique photo that you don’t see. Rather motivated I woke up at 6 a.m. and sneaked out of the bed to arrive at first light at the Nutcracker location. The sunrise from the mountain next to Sofia was really pleasant.

I arrived at the spot right when the sunlight was coming through the conifer tree tops. Golden colour grass with patches of snow made the moment rather awakening. But… No birds. They had not yet awoken. Only a few Crossbills were calling from here and there. I walked forth and back with no luck. Then i heard the call. Nutcracker. I decided to give it a try. Threw out some peanuts and in a minute a bird was around. Then a second one, third, fourth, fifth…seven birds turned up and with absolutely no alarm, they started feeding around. I threw some more peanuts and ended up with couple of hundred shots. The only thing was, it was too dark so I might need to erase most of the shots but never mind. Here are a few shots:

Some misunderstanding between two birds had to be a subject of a dispute. I happened to be too close to get the full scene. Nevertheless, it’s quite unique behaviour that I haven’t seen photographed:

In addition to the Nutcrackers, a Red Squirrel turned up. It got a cone and stood up for some 5-10 minutes eating the seeds only about 5-6 m away from my camera. Here is the result:

On my way home a party of passerines was feeding by the road a brief stop produced this lovely Willow Tit Poecile montanus.


What a nice way to end up the working week. Looking forward to the weekend when I hope I will have some more photography options.

3 thoughts on “Nutcracker photography in Bulgaria”