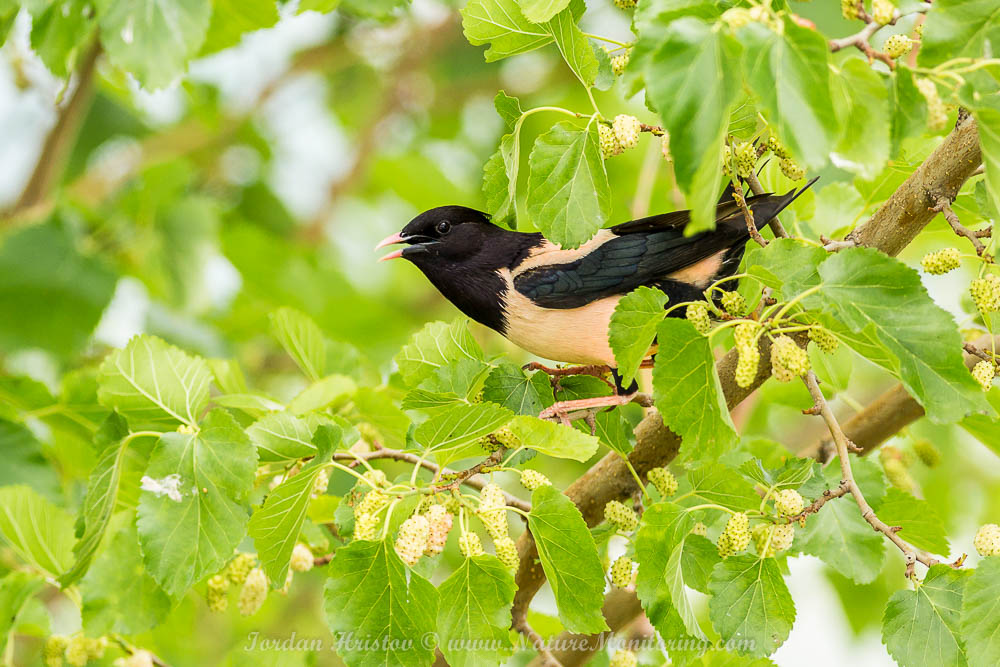 Weather: Fairly hot in the high 20s C with a shower in the late afternoon.

I got the opportunity to guide another trip for Wingspan bird tours right after the successful trip to lake Kerkini in Northern Greece but this time the trip is in Bulgaria. It will be an 8 days travel via some of the major habitat areas in the country.

I collected Robin from her hotel in Sofia in the morning on May 24th and went to the airport to collect Derrek and Paul arriving with a flight from London. It is a very small group but what a great diversity of people from Australia, USA and Great Britain.

Everything went smoothly with the flight and we left Sofia at about noon. It took us about 1,5 hours to get to our first birding place where were also going to have our lunch. We collected some supplies from a small town and started logging bird after bird immediately after we left the town. One of the first birds in the logs was the European Bee-eater. Then we added a Black-headed Bunting. It was the first one for the trip and first for everyone in the group so we had some great excitement. “I really wanted to see this bird”, said Derrek in his pleas of observing the bird.

We continued on our way to the first stop when I saw what I was hoping us to see… “You have to see this bird”, said I looking at a small flock of 20 Rose-coloured Starlings. I did mention to the group that we may see them so it was great to have the confirmation shortly after my statement. After enjoying the Starlings we continued along adding Tawny Pipit which was nicely standing on the road. Then Crested Tit and…more Rose-coloured Starlings. This is when I got really excited. They were absolutely everywhere. There were several mulberry trees around and they were all covered with Rosy Starlings. It was the most numerous bird around. I just could not stop looking at them.

I did manage to stop looking at them and prepare the picnic lunch which we enjoyed very much. It was well anticipated after all the excitement. Right when we finished with lunch two Long-legged Buzzards flew over giving us some good views. Then a distant Short-toed Eagle flew over and a few Calandra Larks were singing about. We took a small walk which produced a at least 1000 more Rose-coloured Starlings. They were absolutely everywhere. Wow, What a start of the trip.

“I didn’t expect to get much on the first day but it was a Booom!”, said one of the group members. That’s how I really like it. It is great that people enjoy themselves.

We continued along our route and added a Lesser-grey Shrike which we witnessed to cough out a pellet. Then we had a few Kestrels, Red-rumped Swallows and several White Stork nests. The sky got pretty dark and time was ticking away so we pressed on to the hotel. We had a bit of rain along the way but it didn’t stop us from enjoying the drive along the amazing gorge of Vacha river valley. Everyone was very impressed by the lush mountains and steep hills covered with rocks. “This can easily be somewhere in New Zealand”, said one of the group members. I could see the excitement and astonishment which everyone had from the scenery.

When approaching the hotel we had a very close and good view of a Grey wagtail in fantastic plumage right by the car. This also caused great excitement and everyone was happy to go for a well-deserved rest. We arrived at the hotel just on time to relax before a nice meal with a local trout. Fantastic start of the trip!