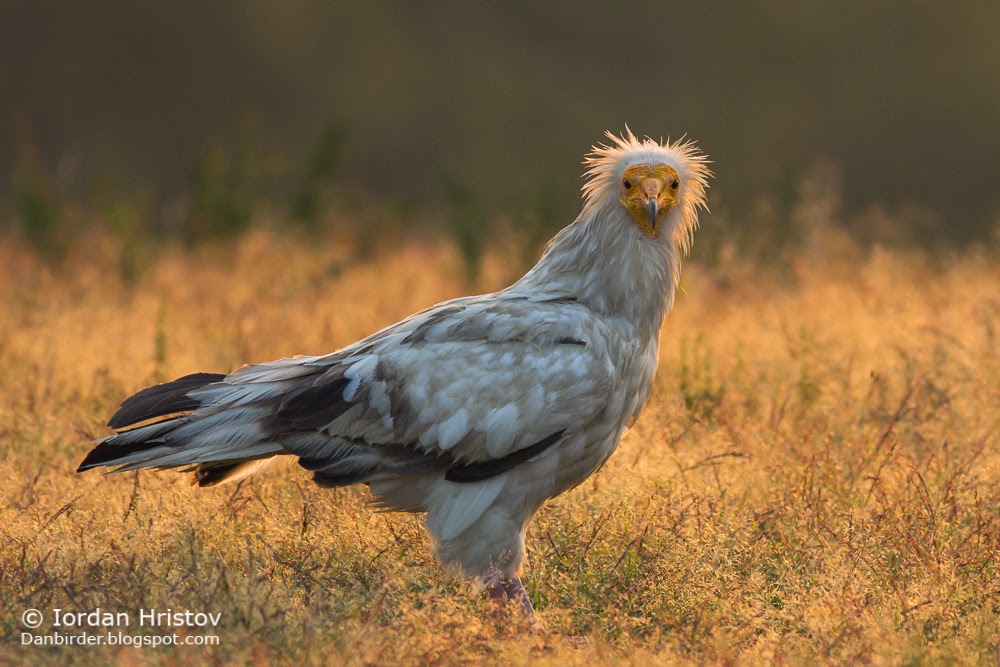 They are really smart and wouldn’t allow someone getting into the hide under their sight. That’s why we had to get up early and sneak into the hide in the dark. To avoid the early start we decided to spend the night in the vicinity of one of the vulture photography hides in the Eastern Rhodope mountains in Bulgaria. This reduced the time for traveling and we had an hour extra sleep in the morning before the photography session.The evening before the photography session was superb. We had a late dinner at the Vulture conservation centre managed by the Bulgarian Society for the Photography of birds / BirdLife Bulgaria and then traveled for about an hour to the vulture photography hide. We put up a tent in the area and had a drink under the moonlight with the smell of wild flowers and herbs. Accompanied by the sound of crickets we sneaked into the sleeping bags.On the next morning the alarm went on at 5,00 a.m. Full of enthusiasm we grabbed the gear and off we went into the hide. It was still totally dark. Shortly after that, the light began to change. The Sun was rising. What a blessing…

With the changing light birds began to sing. The first one to call was a Robin, then Sombre Tit, Green Woodpecker, Jays, Ravens and here they are… The first Egyptian Vultures landed in front of us within half an hour from the entry into the hide.

It was shortly after the sunrise. The “Golden hour”… Superb back-light was outlining the marvelous feathers on the head of the birds. The colours of the grass were creating more contrast with the object making it to stand out in the picture. Have a look at these Egyptian vulture images…

Two birds stayed for half an hour or so when something flushed them. They didn’t appear for the next two hours when the light was already gone. However, we were waiting for the Griffon Vultures to land. No luck though. There were 20 or so birds on the cliff adjacent to the feeding site but at about 10,30 all of them took off to unknown direction. We decided to give them some time since we weren’t quite sure what was going on. After a couple of hours waiting we gave up. It was already 14,30 and although the September light was getting better the birds were not going to come back. so we left. It was time for relaxing.

On the next morning we intended to give it another try but the heads felt too heavy and turned off the alarm that wanted to wake us up at 4.00 a.m. We got up at 9.00 and decided to do some birdwatching instead. We grabbed some sandwiches and had a superb breakfast right under the cliffs where vultures roost.

During our breakfast time we had Rock Bunting, Rock Nuthatch, Blue Rock Thrush, Peregrine Falcon, Black Storks, Kingfisher, Crag Martins, Lesser spotted Woodpecker and a few other good birds. After breakfast we had a walk in the area exploring it for some landscape photography opportunities along Arda River. Unfortunately soon it was time to go home. Anyway, it was a superb morning and weekend.

I totally recommend this hide and the services of Living Nature. This is the tour operating company of the Bulgarian Society for the Protection of birds which aims at raising funds for conservation activities. Especially in the context of the BirdLife International’s campaign to Save the Vultures funds are really vital.