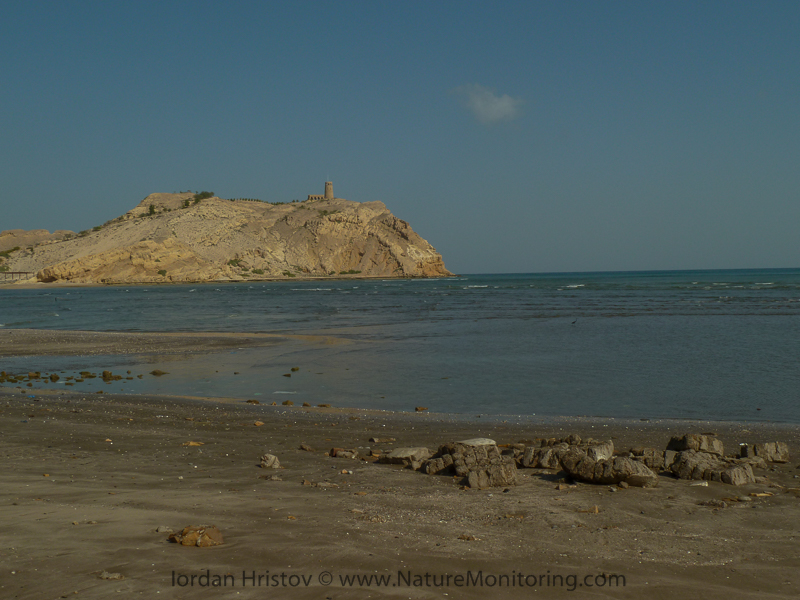 The day started pretty early. I had to pick up my friend from the airport at 6 a.m. so I got up at 5 to be on time. I managed to return my car back to the company with no comments so hopefully everything will be all right. We lost nearly an hour in the morning traffic jams to get to our first place which was Al Qurm park.

We were welcomed at the gates by the local Grey Francolins, White eared Bulbul, Indian Roller and Graceful Prinia. They were all new to my friend as they were for me on the first day. Walking around the park produced a total of 30 species for an hour or so. Some new birds for the trip were Bluethroat, Little Crake, and a new lifeous – Indian Pond Heron. After enjoying this good variety of birds we headed to the beach to see some Sooty gulls, Black-, and Bar- tailed godwit. After a little walk in town we headed north towards Ras as Sawadi.

Ras as Sawadi has a complex of islands and is apparently good for seawatching. We were hoping for Red billed Tropicbird. To increase our chances we hired a boat and a local fisherman to take is around the islands. The usual bargain with the locals didn’t quite ok. We were negotiating a two hour trip for ten rial but we ended with half an hour trip for the same price. These Arabs are really cheeky and always reduce the service if you want to negotiate a price. Anyway we didn’t see anything and headed north to our next destination. It is about 200km away not far from the border with Dubai.

After a few misunderstandings with the navigation system we finally arrived at Khatmat Milahah. We were hoping for Striated Scops Owl but it was pretty quiet and dusty so we decided to go to the shore and camp there.

After doing the checklist we realized we had about 65 species today. Well it is a good start.