The past few days were quite dynamic in terms of traveling, landscape photography and emotions. The national holiday of Bulgaria, March 3rd , gave us a few extra days in the middle of the week and a total of 4 days holiday:  Time enough to travel to further destinations.

The initial plan was to do some mountain hiking but plans are to be violated. A friend and I headed to the East of Sofia where I wanted to photograph a famous church. The plan for the first night was to spend it camping on the bank of Zhrebchevo reservoir to have more chances for sunset, sunrise and night time pictures. We departed as planned and arrived in beautiful weather. Sunset was fantastic with dynamic sky just as we photographers like it. With the approaching late hours of the evening the sky got totally dark and rain started pouring with lightning. I tried taking their picture but weren’t successful. Stressed from the rain we quickly put up our tent but not quick enough so it got a bit wet. Never mind, it was great fun. This would be the first camping for the year. Right after we put up the tent the rain stopped. The night was fairly calm but rain was still drizzling now and then.

The following morning was pretty dark. It was still pretty rainy and having in mind that a part of our gear was wet we decided to cancel the mountain hike in the way we were envisaging it. We decided to make use of the weather and take pictures of some more churches. A famous one in the area was the one in the small town called Shipka. With its golden domes it was rather spectacular. Its construction started in 1885 and was ended in 1902 so it is fairly new but rather picturesque. Thus it is classified as one of the 100 touristic sites to visit in Bulgaria.

I managed to “steal” a few pictures from the rainy weather and was ready for more adventures. Instead of going hiking we decided to go in the mountains but look for a shelter somewhere along the road. A convenient place nearby is Buzludzha which is another of my photographic sites. Being there for sunrise and sunset would be quite productive. So we did. Once we got higher into the mountains rain changed into snow. It was really beautiful.
After a few unsuccessful attempts to find accommodation we finally succeeded and managed to spend the rest of the afternoon enjoying a walk. I managed to sneak into the Buzluzdha monument which was quite a surprise after my unsuccessful attempt last time I was here couple of months ago. Maaan, this was so beautiful!  Although it was ruined, there was still a fantastic atmosphere. I could spend days in there photographing what was left from communism. The view from the “windows” to the mountain tops was stunning. Inside the monument there were still parts of mosaics left over the walls featuring scenes from the local political and folklore life. It was stunning!
By the late afternoon when time for sunset has come, snow had stopped and I was presented with a beautiful sunset with dynamic sky. What a place this is. Two fantastic sunsets in a row! This is called luck. 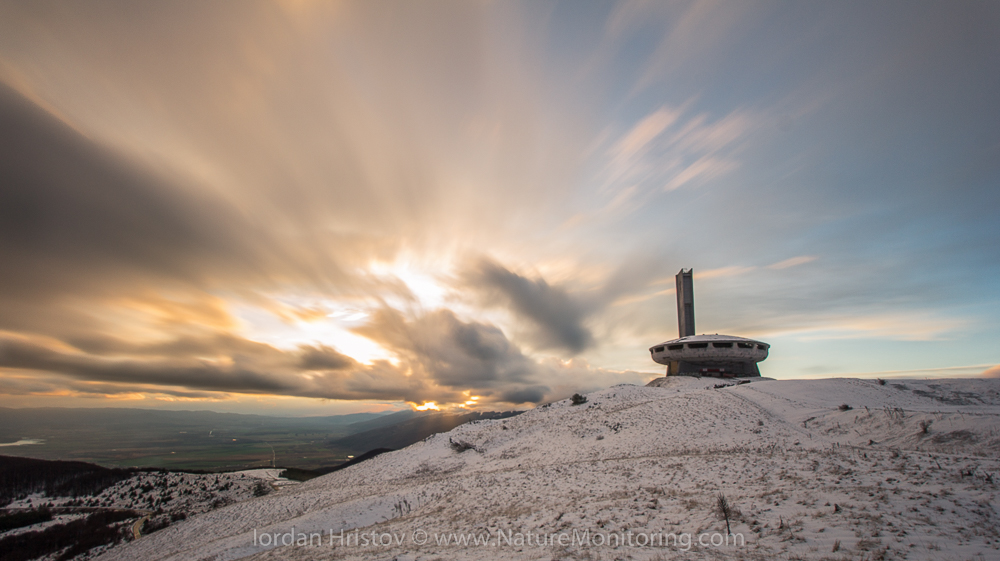 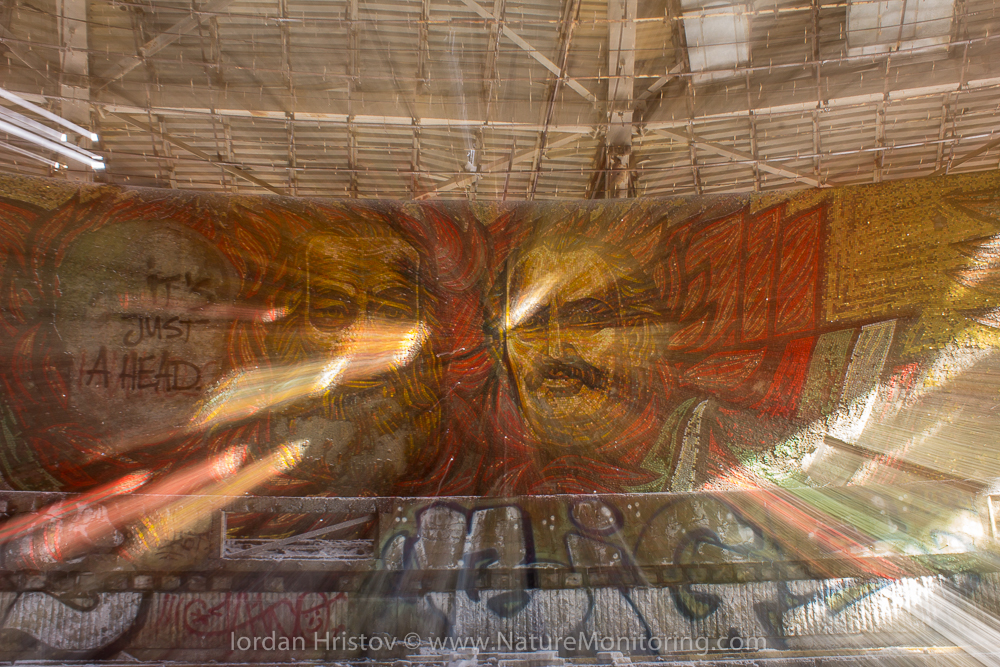 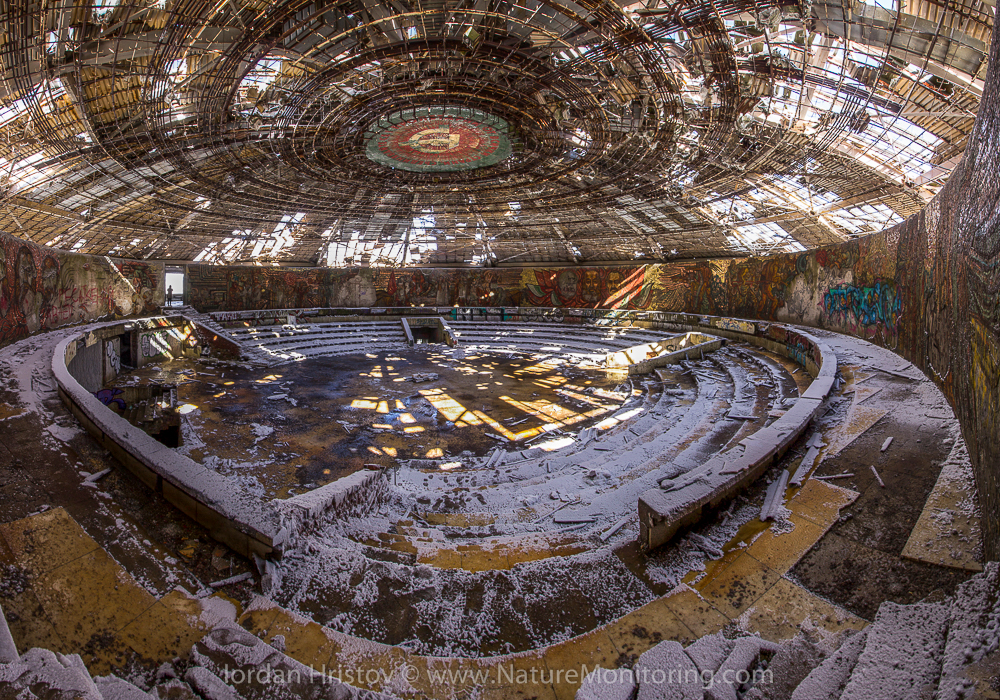 the inner side of Buzludzha monument © Iordan Hristov

The evening was rather enjoyable with lots of dances with other guests of the hotel but the morning after was a bit tricky. I had forgotten to tell the hotel owners that I will be going out for sunrise and gates were locked. Luckily there was a phone number given if you wanted to get out and after some hesitation I gave them a ring. Fortunately the hotel owner did get up and came over to unlock us out for no reason though.

There was thick mist with only 30-40 m visibility. We did go up to the mountain top waiting for sunrise but sky never cleared up. Thus we decided to make another visit to the inside of the monument and this time it was even better than the day before. Thin mist inside the open building was creating a rather spooky atmosphere! This was The shot! Wow, it was worth waking up. 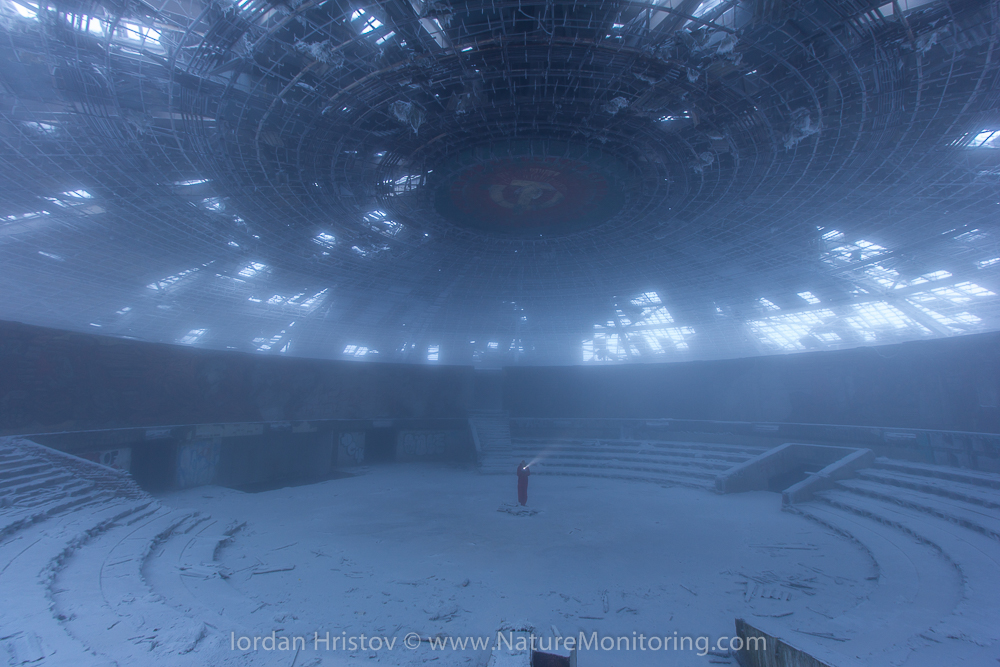 mist inside the monument © Iordan Hristov 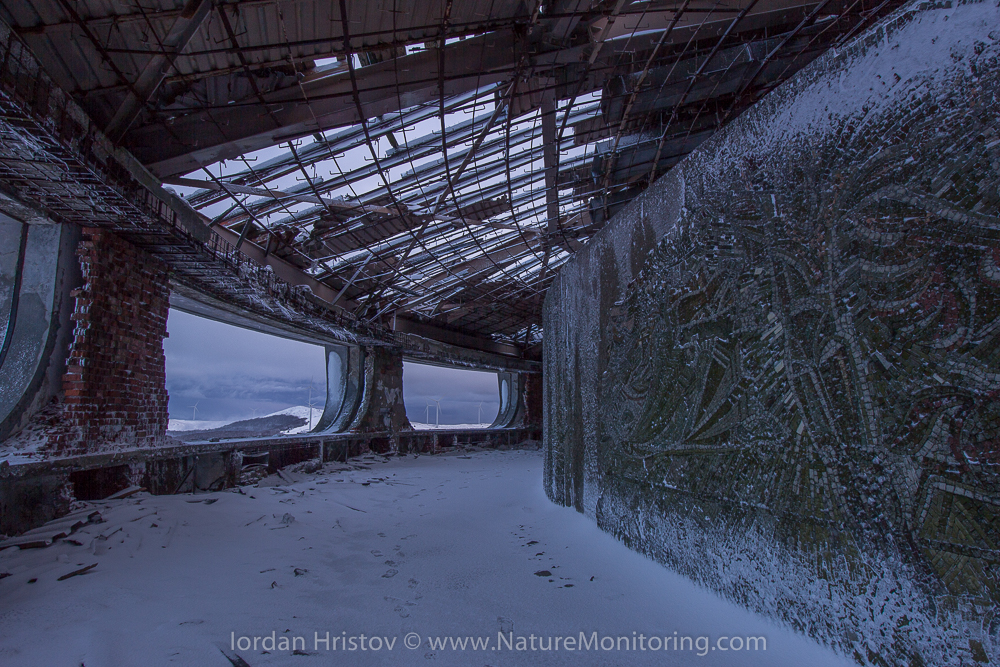 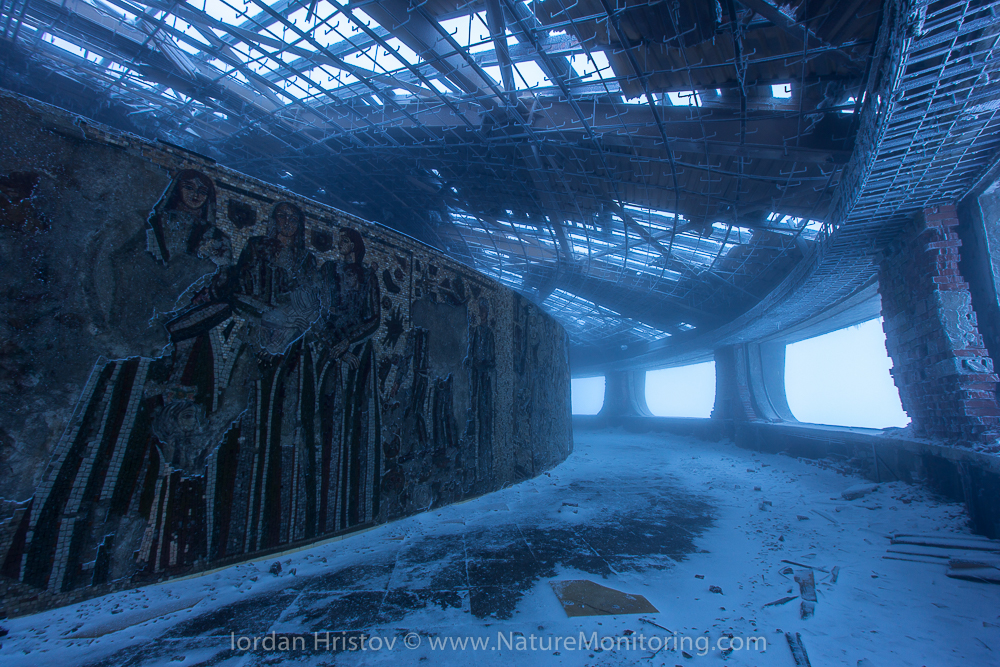 After breakfast the weather cleared up and we were ready to go.

For the day we had planned a visit to some waterfalls about an hour drive from here and some two hours hike into the mountains. Thus we would have still made some hiking to approach our initial plan. So we did. The weather was really beautiful which would be fantastic for waterfalls. Birds were actively singing everywhere and we did some good birds like Sombre Tit, Grey Headed Woodpecker, Lesser spotted Woodpecker, displaying Common Buzzards and our first Black Storks for the year flying over the mountain tops. We did manage to reach the waterfalls and spent quite some time when we realized it was nearly 5 in the afternoon. 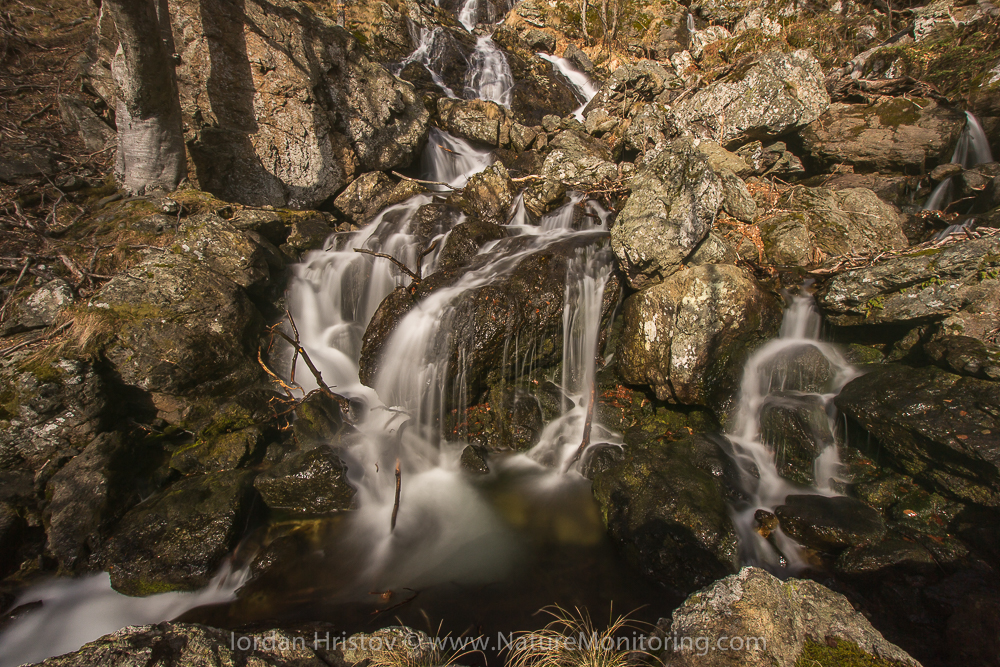 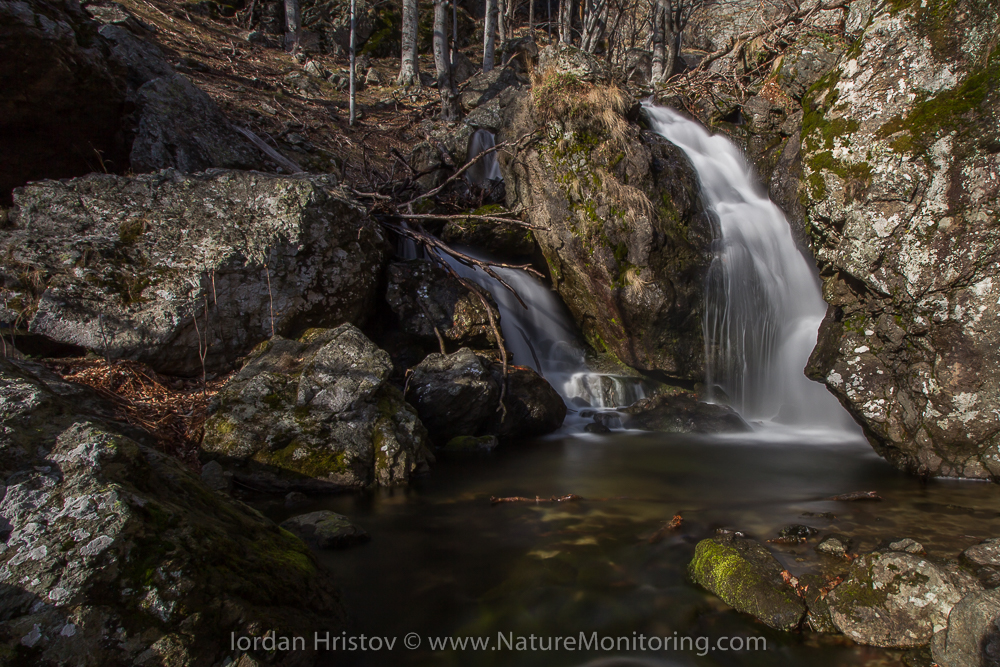 The initial plan was to drive back home but the area was so beautiful that we did not want to leave.
–    How about camping again? – said my friend as a joke.
–    Well, why not? – it was getting late and we had some 4 hours drive to Sofia. There is no point to do that at all.

Thus we decided to spend another night in the area of Tazha: a beautiful village at the foot of Central Balkan mountains. It was absolutely fantastic! We prepared a simple but very delicious dinner and kept staring at the millions of starts! It was absolutely superb indeed!  This will be unforgettable!

The morning after was even greater. We were woken up by the singing birds at 6,30 and still in my dreams I started recording all the birds I could recognize by their calls. We logged over 20 mainly common birds just around the tent. A pleasant surprise was a Great Grey Shrike which is still in the area and a pair of Black Redstarts which must have just arrived. After a fantastic coffee and birdwatching we gathered our tent and hit the road. After a few stops here and there for more birding we arrived in Sofia in a reasonable time before all the traffic had started after the long holiday break.

It was a fantastic holiday, indeed!