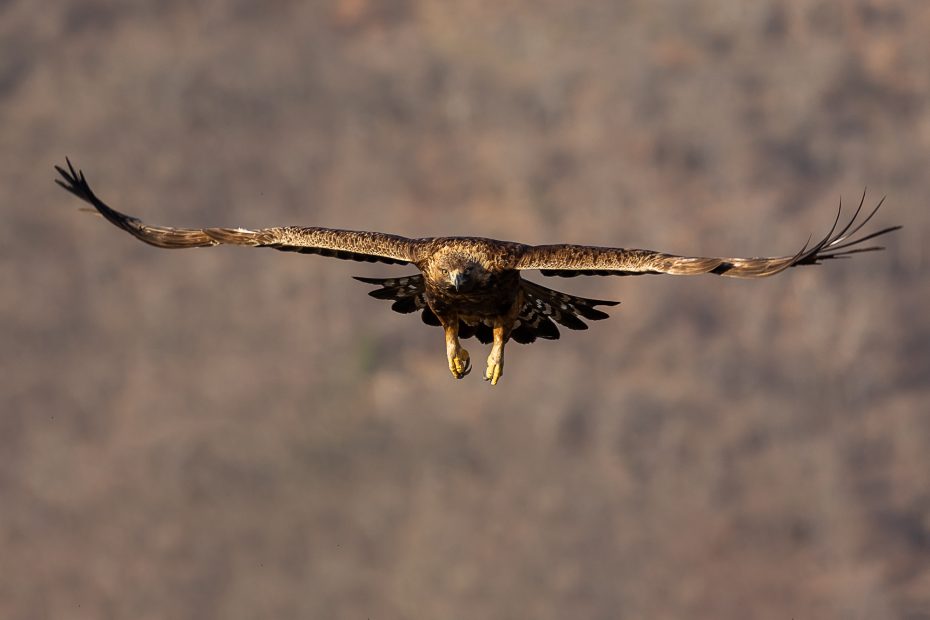 Eagles, Pelicans and Nutcrackers were the main focus of my recent bird photography trip in Bulgaria and Northern Greece. It was divided in three parts. First we spend a few days in a hide for Golden Eagle, then we travelled to Greece to photograph Dalmatian Pelicans and returned to Bulgaria for a session with Spotted Nutcrackers.

I met my guests at their hotel and we started our way to the Golden Eagle hide situated in the Eastern Rhodope mountains in Bulgaria. On the way we stopped for a quick session with Long-eared Owl. There is a spot on the way where dozens of birds gather on a roost every winter. Shortly after arrival we spotted the first birds right by the car. As the position of the birds was not very suitable for photography we walked a bit to find another “Christmas” tree with Long-eared Owls. It was a short break of the journey and soon we headed to our eagle area.

Another distraction on the way were half of dozen of Little Owls which were roosting on chimneys along the way. We had to stop and enjoy them. The first one was fairly low down and made a nice photo of the bird.

We arrived in the area fairly early in the afternoon and had time to explore it a little bit since this is going to be our only chance for the next couple of days. We shall be spending them in the golden eagle hide from dusk to dawn so it is a good idea to see the area which is a favourite place of mine. Once we arrived we stopped at a local bee-keeper, then explored the hills in the area for some stunning landscape views.

On the following morning we got up at 5 am to enter the hide before the birds can see us. It was a wonderful morning. We did not have to wait long before the first bird appeared. Griffon Vulture circled around and landed just 30m away from us. It was still shy so we had to give it some time to calm down. We gave him 3 hours before we could photograph. Together with 4 more vultures they just roosted and did not want to eat. It is not a big surprise as their hormones are storming. They have to start nesting. Some pairs have already occupied their nests and they had to protect them.

Two Golden Eagles arrived about an hour after the Vultures departed. They were quite hungry and did not paid any attention to us. A few minutes later a young Golden Eagle from last year also landed in front of us so we had three at a time! What a sighting! It was truly spectacular.

I had taken the new Canon R6 camera for testing and i must say, it was absolutely amazing focusing system. It managed to follow the flying birds even when crossing the perches. 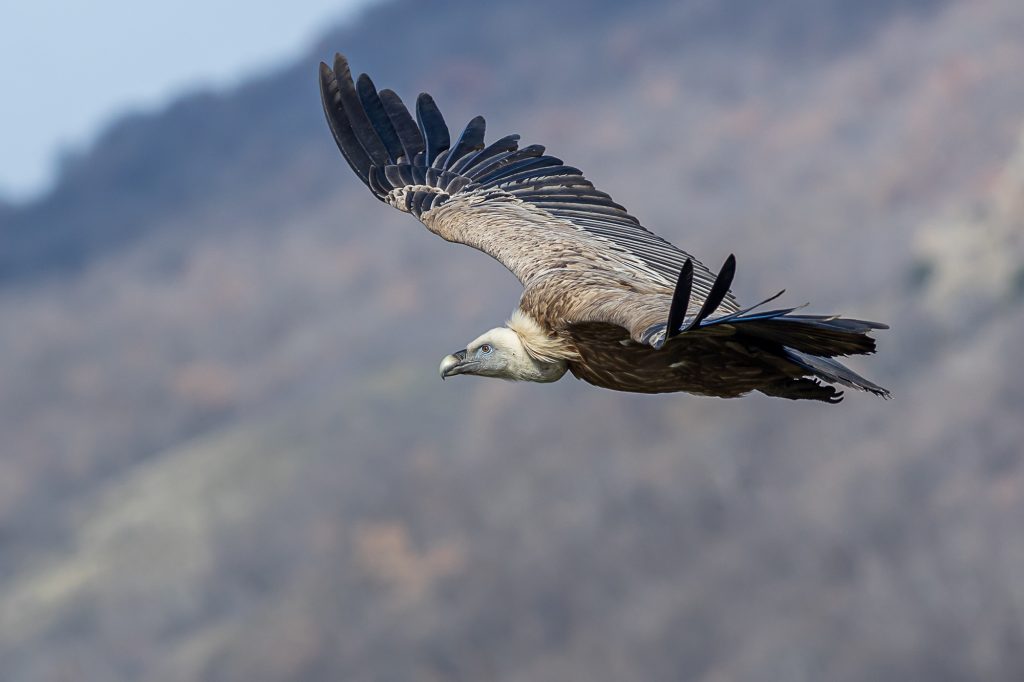 On the second day of our stay in the hide we were not as lucky with the vultures. Weather was really windy and it was not before 4 pm when the first Golden Eagle arrived. This time we did not get the  young one. In both days we had the Golden Eagles at the stunning evening light. Truly amazing experience even if you are not a photographer. Sincerely recommended! 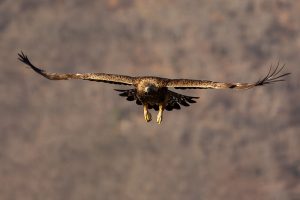 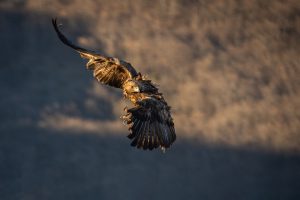 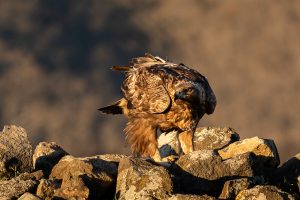 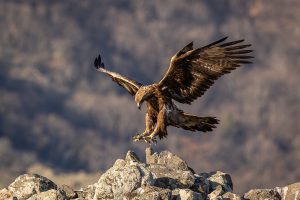 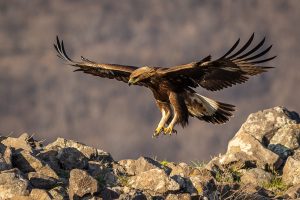 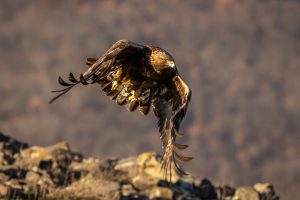 After two days in the Golden Eagle hide, we started our way to lake Kerkini in Northern Greece where Dalmatian Pelicans strive.

On the way we wanted to stop at an amazing lagoon where we wanted to photograph Flamingos. Did we see any? Well, about 4 500 birds were there to give the most stunning view of flying pink carpets. It was a great break of the journey which ended to be about 7 hours with the stops.

At lake Kerkini, local fishermen catch fish and give it to photographers to feed the pelicans. The birds are really tame and you can experiment with a huge variety of conditions. The only limitation are the memory cards. We did two sessions from a boat and two sessions from the shore. On one occasions we decided to improvise and did not regret it as we observed the natural hunting of Pelicans.

Shortly after arrival at the lake, we were hungry for Dalmatian Pelican photography and jumped onto the boat immediately. We had great conditions that people here have been waiting for 5 days. We did some back light photography of flying birds, the back light portraits, more portraits of illuminated birds by the setting Sun and continued into the blue hour for reflections and panning shots. These two hours on the boat were pretty intense and we already started filling up our memory cards. What an experience!

On the following morning we got up at 6 am to be at the lake at the blue hour. It is a great time for portraits. Then we returned to the hotel for a late breakfast and took some time off to recover from the early starts. The afternoon was mainly relaxing wondering around the lake and more birdwatching then photography. We saw two Greater Spotted Eagles, about a hundred Common Cranes, several Lesser White-fronted Geese, Bewick Swans, Flamingos and many other birds. In the late afternoon, we returned to the shore of the lake to witness the natural hunting of Dalmatian Pelicans. Gulls were attacking the pelicans to take their fish and on several occasions we could see Black-headed Gulls literary landing on the back of the pelicans. This was something i had never seen before.

On the following morning we had the most unforgettable experience ever. We anticipated these conditions for the following morning but weather does whatever it wants. Mist covered the lake shortly after sunrise giving this dream atmosphere for every photographer. Pelicans were backlite by the rising sun right in the middle of the slight mist covering the lake. What a treat! This was a real bonus!

After this productive session we decided to explore the area a bit more. This time our targets were Sombre Tit, Rock Nuthatch and Wallcreeper. We found them all but pictures were only documentary.

In the afternoon we had our last session from a boat to photograph reflection against the colourful sky. What an experience! After these intense two days of Dalmatian Pelican photography, we had to leave back to Bulgaria for a photography session with the most peculiar Spotted Nutcrackers 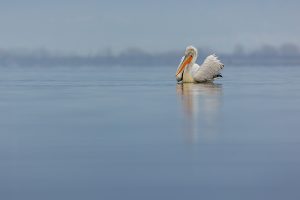 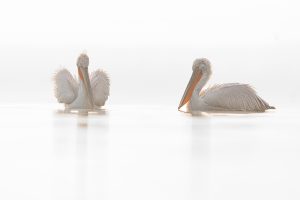 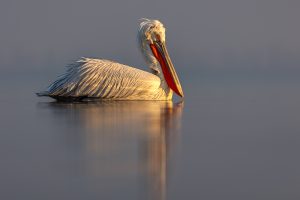 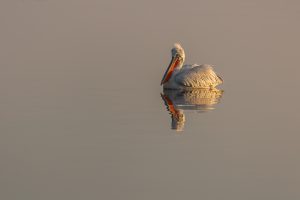 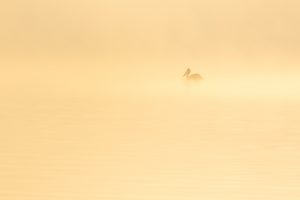 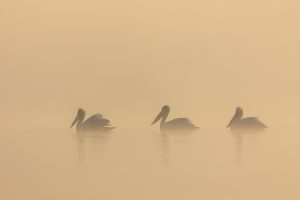 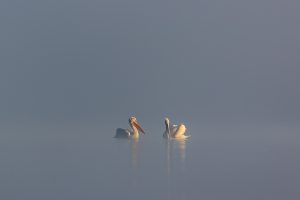 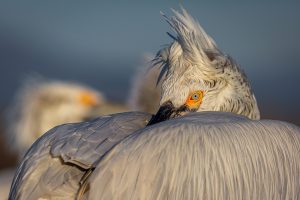 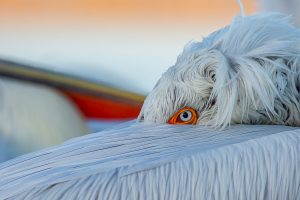 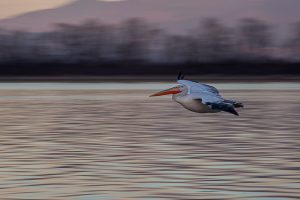 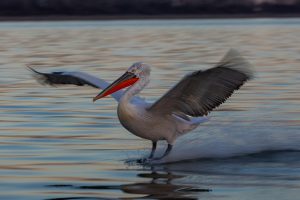 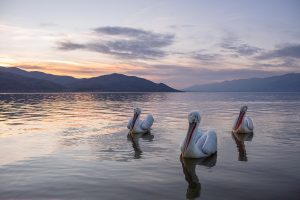 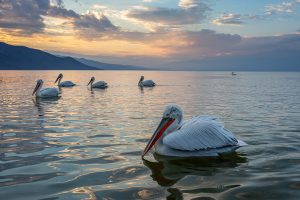 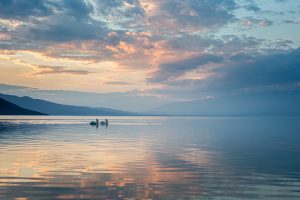 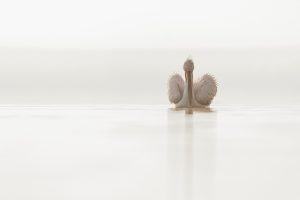 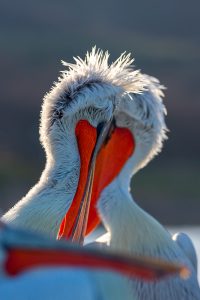 We had a lay in and started at 7 am. Crossing the border with Bulgaria was quite easy and shortly after lunch we were already walking in heavy snowfall. Nutcrackers were there waiting for us. They were pretty hungry in these weather conditions so i fed them with 1.5 kg of raw peanuts. At some stage we had more than 15 birds at a time. They were landing literary on my had. Well, i did help them with some peanuts. Then i fed them from my hand. It was so hard to leave. You just cannot stop photographing these birds. We had another “Christmas tree” with Spotted Nutcrackers just a hand length away from us.

The squabbling Nutcrackers is one of the main targets for many photographers. Well, here are the birds right in front of us. We spend couple of hours with the birds and had to leave the area. 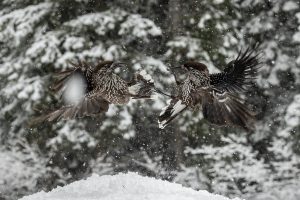 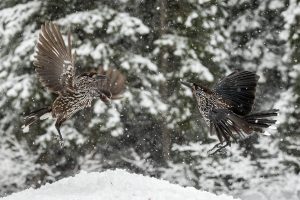 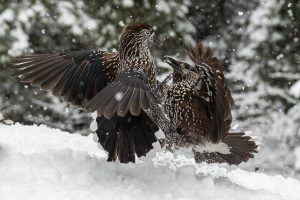 This was the end of the truly productive bird photography trip for Eagles, Pelicans and Nutcrackers.

If interested in joining me next year, feel free to see the description of the itinerary here.