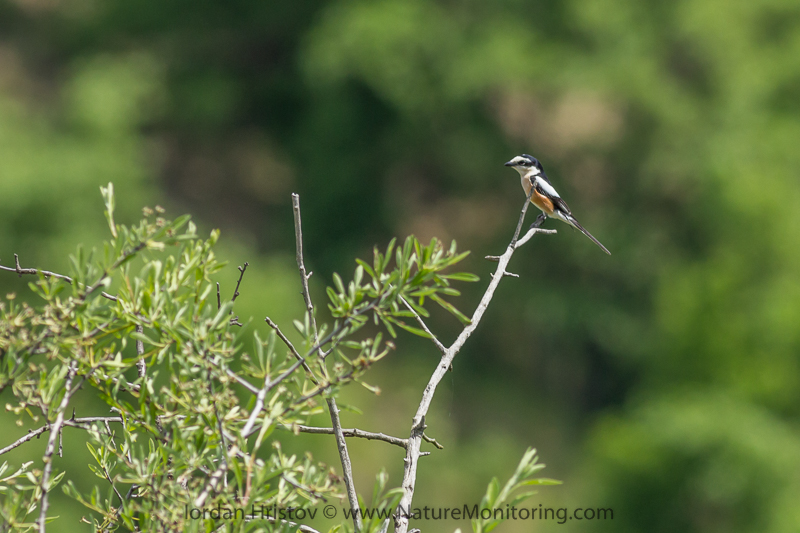 What a superb day. We started with a well desired Black-headed Bunting which walk me up when I first opened the balcony door of my room. Later on with logged Rock Bunting, Sombre Tit, Subalpine Warbler, Blue Rock Thrush and Lesser spotted Woodpecker. At lunch time we had a splendid stop for imperial eagle, Masked Shrike, Olive-tree Warbler and we ended the day with superb views of Semi-collared Flycatcher and Common Redstart. What a day this was.

Once I woke up I decided to open the balcony door. There was thick mist which was a bit disappointing. However in the next moment a Black-headed Bunting called. This made the morning really bright. The students will like to see and hear this bird so I quickly went down the stairs. After breakfast we all managed to see this well wanted bird and departed to our next destination.

It was meant to be a place for Rock Nuthatch but had a few other specialities that were on the list: Rock Bunting, Lesser-spotted Woodpecker, Blue Rock Thrush, Sombre Tit and Subalpine warbler. Fantastic stop. The fog cleared off so we were ready to go to the high cliffs. Before that I wanted us to stop and try for some woodland birds. This would give some more time to the mist. We visited the forest next to the visitor centre of BSPB in the Eastern Rhodopes where our main target was Eastern Bonelli’s Warbler. We struggled a little bit but managed to see it and departed. It was going to be an intense day and we had some good stops along the way.

Shortly after departure we stopped again. This was out last chance to check for Rock Nuthatch but again no luck. Something is going on with this species and no one knows nothing about it. We carried on to a place where we wanted to see more local specialities: Masked Shrike and Olive-tree warbler. In an hour we were at the site excited by the views of Masked Shrike. More than two birds were showing well and singing occasionally to a surprise of my guests from Norway. The Olive-tree Warbler was a bit more skulking but some of us managed to get a glimpse of it. Again time to depart.

This time the highlight will be the imperial eagle. We stopped at a well known site which i will not reveal for purely ethical reasons. At the site we met a few of my bird id students from previous and current years. It was great to meet the local and international students. I think especially the Norwegians appreciated it very much. While having picnic lunch an adult Eastern Imperial Eagle turned up. It was rather distant but with a scope we could see all the necessary id features. Fantastic bird.

Imperial eagle seems to be increasing in Bulgaria in the last several years and more pairs are being found. Hopefully we shall more of these splendid birds in the future. Along the way to the hotel we stopped at a checked location for Montagu’s Harrier. Both male and female were sitting not far from the road allowing us some really good views.

Once we arrived at the hotel everyone was still willing to continue birding regardless of the intense day. We did a short walk around the area and saw our first Semi-collared flycatcher, Common Redstart, Wood lark and other birds. What a day. We ended up with 95 species of birds for the day. Here is the full checklist of the seen birds: