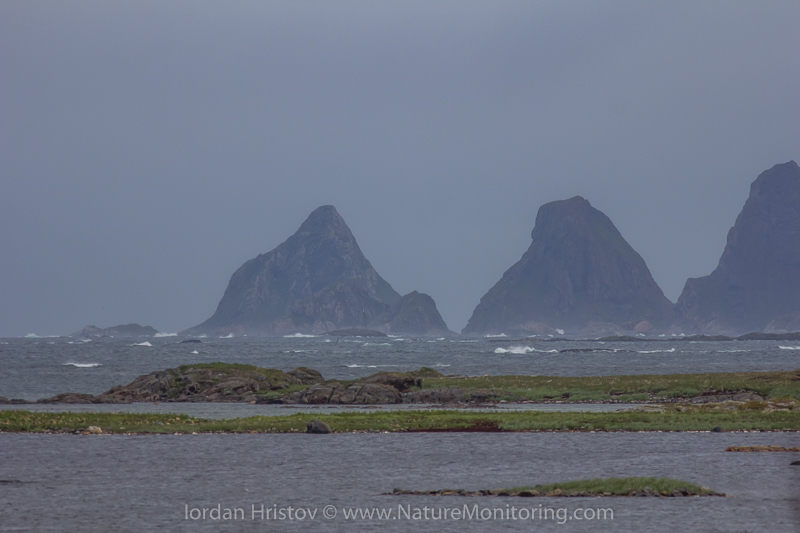 Today’s route was familiar to me from last year and i knew it wasn’t difficult. There was some hillside but nothing like yesterday’s route. I started on time enthusiastic to see if my find from last year was still around. A Hawk Owl with chicks was sitting nicely in a forest by the road but not this year. I checked the same forest but the bird wasn’t there. Luckily i managed to find it again at another point so apparently the bird has just moved. Alternatively it would have come down to the forest by the road when the chicks had hatched. Anyway good to see it is still around although i couldn’t take any pictures this time. Other birds worth noting are quite a few Redstarts and Pied Flycatchers.

I managed to complete the route rather quickly and right when i approached the car an adult White tailed Eagle came down from the mountains straight into the see. I has spotted something. With its wingspan, it took it no time to approach its prey. The eagle just dropped by the water with hanging and spread out feet and captured a fish with no effort. What a sighting this was! Never seen this before. Fantastic! What a reward for the done job.

After this sighting i hit the road again to my next destination: Andenes. This time i shall not be camping and would need to find some nice and cheap place.

The trip was much longer than expected. It took me the whole afternoon to get there and pass over 200 km. En route i stopped for some birding and it was great to see breeding Pintails, Dunlins in breeding plumage and lots of other birds.

At Andenes Norway I wanted to do a Whale safari. The area is known for its safaris. Luckily i managed to find an information office very quickly that gave me all the needed information both for the whale watching trip and for accommodation.

There are two companies in the town that do Whaling safaris : 1.Whale Safaris and 2. Sea Safari. The first one seems to be a bit more commercial whereas the second one organizes smaller groups with a fast boat. I spoke to people from both companies and yes the second one is definitely my thing. Moreover the boat was offering lower angle for photography which is exactly what i need. In addition they offered an extension to two bird islands. That was my choice. The weather today wasn’t suitable but they were about to run a trip on the day after. They were also offering a trip in Midnight sun but the forecast didn’t look promising for that so i signed up for the running trip which will be tomorrow.

Once i sorted this i headed to my place for the next three nights. It was a small place in a village called Nordmela. An old school was redone by local people who were offering a place for a third of the price i payed in Mosjoen. The place was rather clean and cosy so it will make a good rest from camping.